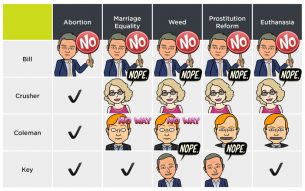 Australia where the bloody hell are you on gay marriage?

Following on from New Zealand, Ireland and many other states the United States Supreme Court has recently ruled that banning same sex marriages is a breach of the 14th amendment’s right to life and liberty.  It makes you wonder when Australia is going to institute change.

The marriage equality law will pass it’s final reading in the House tonight.  It is a measure of how things have changed. The passing of the law will not bring an end to all prejudices, inequalities and debilitating practices. But, today is a day for celebrating. [Update: Louisa Wall’s speech added.]