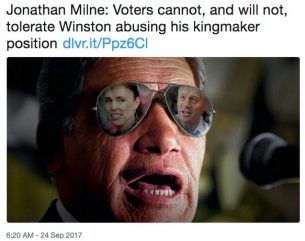 Rob Salmond at Polity highlights John Key’s naivety in politics. It isn’t hard because he is a poor amateur and largely unskilled.  If he ever raised his eyes from golf and photo-ops for long enough to exercise his brain, then he could look at the governments of Sweden, Norway, and Denmark

Key is clearly getting nervous about the implosion of his possible electoral partners in 2014. He’s running the “largest party has a moral mandate to govern line” again. It’s destabilising, and it’s rubbish, here’s why…