Poverty is too difficult in Key’s New Zealand

Key is out of touch. But not so out of touch that he doesn’t know about the poverty crisis in NZ. The denial and evasions are deliberate.

Time to move to Planet Key?

If you need a good laugh this morning

A cartoon for Planet Key 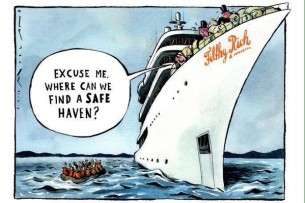 The shame of poverty in NZ

According to the Ministry of Social Development child poverty is worse in NZ than in any European country. According to the Child Poverty Action Group new figures are going to show an increase in poverty. According to the coroner a damp unhealthy state house contributed to the death of a child. Welcome to the “brighter future”.

Turns out that “Planet Key” is not an election advertisement after all.

What the hell? This isn’t an election advertisement. This is someone expressing their views in music and video. This judgement by the Electoral Commission doesn’t appear to have any real basis behind it. Quite simply they are  wrong.

A tale of two taxpayers

In news this week a Putaruru woman walked 25 kilometers to attend a compulsory WINZ meeting despite there being no jobs available and the Government signalled that it was going to help Chorus with costs overruns despite Chorus having a contractual obligation to roll out the fibre optic network.  On Planet Key beneficiaries are obviously expected to comply with their requirements no matter what but rich corporations will be given a helping hand when times get tough.

The rhythms of life

On Planet Key natural body processes are ignored, and nature has been tamed into a golf course. It’s a place where mothers don’t lactate or have a heightened sensitivity to their babies’ cries; a place disconnected from the chaotic consequences of climate change.

Key’s snub to unions and workers

National promised us an “unrelenting focus on jobs” and delivered record highs in unemployment and emigration.  Now Key is refusing to even attend a Union jobs summit,  because on Planet Key everything is just fine. The unwillingness to admit that anything is wrong is just blind arrogance.

Meanwhile back on Planet Earth

It’s now clear that National are unfit for office anywhere but Planet Key. Which is unfortunate, because here on Planet Earth, things aren’t going so well. We need new ideas, we need action, we need results. We aren’t going to get them from National.

Law enforcement on Planet Key must be a strange business: “Mr Key says he called in the police on the teapot tapes because he wanted to find out if there had been an offence. He argues Dotcom is different, because his Government has already admitted what it did was unlawful.” So, what do the Planet Key Police do they do when they catch a crim? Tag him and let him go?

Update: Breaking news – we all expected this didn’t we – Key was briefed on the Dotcom case in February.

The speed with which Planet Key caught on is a measure of the public recognition that the Nats have lost the plot.

My regular Sunday piece of interesting, longer, deeper stories I found during the week. It’s also a chance for you to share what you found this week too. This week: Obama the Tory, fish, Planet Key and the UK’s hit political single.

It came from Planet Key

John Key on the impoverished Chatham Islands, holding a huge crayfish. He says ‘big as a horse, freshly cooked, $80 a kilo.’ He kisses the cray, then looks at the camera and says ‘jealous?’ Christ, what a cock. Those 270,000 kids aren’t jealous, arsehole. They’re hungry. The fact he knows the price of cray off the top of his head but not how many Kiwis are unemployed tells you all you need to know.

Does anyone have the number for John Key’s supplier? Because when he answered a question in the House yesterday about poverty and low pay by saying that in his paradise, Planet Key, there would be no toilets and no jobs, my first thought was ‘man, that guy is on some good drugs’. My second thought was he’s gone and made that Planet Key tease into a meme that’ll haunt him.