I’ll cautiously call the previous Roy Morgan, which caused so much angst, an outlier.

No significant changes in yesterdays TV1 / Colmar Brunton poll, with National unchanged on 49%, Labour unchanged on 31%, and all changes within the margin of error. 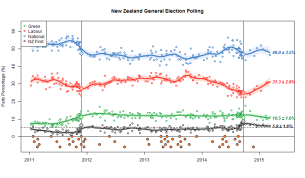 National down again and Labour up again in the latest Roy Morgan poll.

Public support for the Iraq deployment (In which the insightful and knowledgable Mike Hosking springs to the defence of the embattled PM!)

Despite the best efforts of Mike Hosking, the poll numbers tell us that Kiwis have lost their historical appetite for this kind of misadventure.

Three polls is a trend

That’s the third poll this year to have Labour well up to 30% range.

How does Labour keep the momentum?

Labour have bounced back well from the disastrous election result. But how do they keep up the momentum?

National have gambled everything on “Team Key”. They may yet wish that they hadn’t.

The Big Lie in action

This morning Rob Salmond did a great post about the “big lie” – the spin coming from the Right that Labour hasn’t concentrated on policy, just dirty politics.

I think that most New Zealanders…

Our PM is fond of telling us all what we think. In the wake of Dirty Politics he is working it overtime, telling us all that we believe his spin. Interesting then to get some actual data on what (extrapolating from a sample) most New Zealanders really do think. Many thanks to the Horizon polling people for putting this up on line.

The latest Roy Morgan poll is mixed news for the Left. A second high result for National, but Labour’s vote holding steady after difficult weeks.

Two polls tonight with very different numbers. They can’t both be right – so which one?

The Roy Morgan polls continue their mad merry-go-round, and we bloggers continue to get too excited about it. The latest RM projects a win for Labour / Greens.

That ‘ol margin of error

There is no sensible “political narrative” that makes sense of the two most recent polls, it’s just noise – the margin of error. But the underlying trend is still good for the Left…

Yesterday’s Roy Morgan poll looks good for Labour, but individual polls are noisy. Much more importantly, better measures such as the Pundit poll of polls are also looking good for the political Left. Let’s see Labour and the Greens extend their lead to establish a clear majority, without NZF or any other party holding the balance of power…

After good news for Labour in the most recent TV1 and 3 News polls, the latest Fairfax poll is the third in the set confirming that the party has emerged from the recent media circus in OK shape. As far as I know that’s the last big poll of 2012, and with the Left / Right gap halved since the election, a reasonable place for Labour to be sitting at the end of the year.

Individual polls are nothing to get too excited about, it is the trend over time that matters. That said, the TV1 and 3 News polls tonight were both good news for Labour and Shearer.

Encouraging polls in both NZ and America.

Yet more evidence that women are the smarter sex.

The last three polls have all been good for the Left. I’d like to be able to point you to a poll of polls to have a look at the trend, but both Curia and Pundit are stuck in an April time warp.

Update: Great to see the Pundit poll of polls up to date again – check it out.

Another poll to add to current mix. Not a big shift, but in the right direction, and getting the right kinds of headline.  And here’s another headline that isn’t going to help the Nats – the wage gap with Australia is growing at the rate of $1 a month.

Will the Greens lead the next government?

Two recent pieces in The Herald draw opposite conclusions from recent polls (one of them, alas, is drivel). Matt McCarten asks if National’s free fall, and the rise of the Greens, foreshadows a Green led government in 2014…

A TV1 poll yesterday had Key falling as preferred PM, but no significant change for the major parties.

According to the latest 3 News poll. National’s long slide has begun. Key’s popularity has also fallen to its lowest level yet as PM…

Pundit’s poll of polls tracked 57 individual polls this year, four of them appearing just a day or so before the election.  Every single poll predicted National with the seats to govern alone.  Didn’t happen.  The polls over estimate Nat support to the tune of about 4%.  They need to rethink their methods.

Main parties down minor parties up

The two TV polls last night had both major parties down, and The Greens on the rise to 13%.  The Herald poll has NZF on 4.9%.  I would expect the Nats to fall as the bungled and aggressive handling of the teapot tape fiasco has time to impact the polls.  It’s going to be an interesting week.

Labour is down in two recent polls (albeit margin of error), but over all the news is good!

Two polls out yesterday show no significant changes, with National well in front.   Don’t panic!  The campaign has only just started. Events always take a while to show up in the polls.  The Left needs to see movement soon – time’s running out fast – but it isn’t a surprise not to see it yet.