On the trailing edge: Brownlee on Rena

I was reading an article looking at the aftermath of the Rena shipwreck in the Herald. In it I read some ridiculous statements by Gerry Brownlee that seemed (like so much from him) to come from the early part of the last century. It appears that he (and his minons in the M0T) haven’t quite caught up on rapid progress of the digital age in nautical circles. Hasn’t he heard about AIS? Or computers?

There’s a TVNZ poll out tonight and a Herald poll tomorrow morning but, ahead of them, here’s some other new polls results that point to trouble for the Nats. 27% of young people want to leave New Zealand. 82% of people oppose farm sales to foreign buyers. 24% of people will change their vote over the Rena.

The Rena disaster and response: a study in neoliberalism’s failures

KJT looks at how the neoliberal fly-by-night attitude set the grounds for the Rena disaster and the inadequate response. 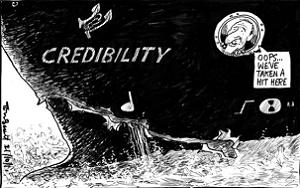 More protests in Tauranga. Simon Bridges blames “out of towners”.

A recent poll confirms that the expected loss of Nat votes over the Rena disaster is a real effect.

DPF is stirring the sewer again with ridiculous smears about a Labour candidate. Does he resort to mud-flinging due to a lack of National policy that stacks up?

Did Hone Harawira call for Steven Joyce to be hanged?  Ahh – no.  Someone at 3News needs to switch to decaf.

Update: 3News – who are very responsive with this sort of problem – have tidied up their reporting of this issue.  Bravo.

JK: The last thing I need is a ship on a reef

It’s all about John Key – the Rena spilling oil everywhere is so inconvenient for him. Never mind the environmental damage…

The Front Fell Off

Clarke and Dawe on maritime disasters, all good build up to our own home-grown version…

Nats’ Rena spin all at sea

The Nats are clearly at panic stations. They’re trying to minimise the Rena disaster by comparing the number of dead animals to those killed by other means. As one emailer put it: “it’s like saying the Christchurch earthquake was no big deal because more people die of cancer”.  Meanwhile, Key visits oiled birds and says they’re the price of economic ‘progress’.

What could have been done differently

“Show me how you’d do anything different” says John Key. Let me count the ways. Increase the liability limit and get specialist vessels beforehand as was recommended. Get salvors and the Awanuia there quicker than 4 days. Take assistance offered. Organise the locals immediately. Put a hold on deepsea drilling. Replace Joyce.

Two weeks ago I thought that Goff and Labour did not have a chance in this election.  National’s lead in the polls seemed too big, the country still seemed to be in love with John Key and Goff just was not getting the media cut through necessary to change hearts and minds. Then something happened.  The wheels started to fall off National’s well honed machine.

The Rena timeline: capacity and execution

The Herald has produced an extremely useful and detailed timeline of the Rena disaster. It raises several questions that you can divide into two categories: first, did the government have the plans and equipment it needed to deal with a spill and, second, was its response carried out effectively? The Nats know the lack of good answers hurts them.

3News reports that: Key dismisses Goff’s oil drilling moratorium as ‘pure politics’.  He’s right.  But not in the way he thinks.

My images of Rena

From my facebook. Some opportunistic bugger is trying to offload their boat. TomScott in Weellington does his cogent best as does the Herald cartoonist. Then there is my favorite (despite its grammar error).

In praise of volunteers

Thanks also to the volunteers who are turning up in their hundreds for the Rena cleanup effort. We’re lucky to live in a country with such a generous and active volunteer tradition.

Just me or is he developing a severe list? Could be in danger of breaking up. 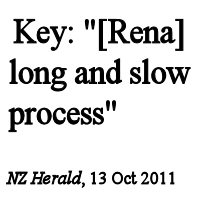 Can we risk a real spill?

The Rena disaster has put the spotlight on the environmental risks of National’s deepsea oil drilling plans. Yes, they’re not the same thing. In fact, an oil spill from a drilling platform or one of the ships serving it is more likely than from a freighter plowing into a well-known reef.* And there’s a hell of a lot more oil involved.

One of the turning points of Bush’s presidency was the failed non-response to Hurricane Katrina.  It’s starting to look now very much as if the wreck of the Rena is John Key’s Katrina moment.

In a depressingly familiar pattern, National is more interested in avoiding responsibility than fixing the Rena disaster. They left it to Maritime NZ. Who left it to the shipping company. Now, the oil’s coming ashore. The promised soldiers didn’t show up yesterday. All the Nats can do is criticise locals for acting on their own.

3News has him caught out lying, The Standard has his office caught lying, and his government’s failed to act on the worst environmental disaster New Zealand has had.

Not to mention the crisis at first five-eighth.

National’s handling of the Rena oil spill is fitting into the same depressing pattern as Pike River and Christchurch – hands off, leave it to the private sector, ministers trotting out excuses rather than leading. We’re even getting the mandatory Key photo-op today, doubtless accompanied by a hollow promise.

The stranding of the Containership Rena on Wednesday morning, occurred in clear fine weather which has persisted for 3 days now. This clear weather is due to deteriorate starting today with a change in wind direction around midday. It is expected that by the middle of the week it will be too late. That before the next calm period the ship will be broken on the reef. What should have been done?

Our own oil spill

If we can’t deal with a small oil leak from a grounded ship, what are we doing planning deepsea drilling on a grand scale?