Why UK Labour lost?  Part 8: What it takes to win

The UK Labour Party in the 2019 election assumed that like in 2017, the release of their policy manifesto would see their support increase significantly. Assuming that 2019 would be a re-run of 2017 was a foolish mistake.

Democratisation by Social Media and the Internet Is Just Meaningless Waffle

Social Media and the Internet are literally in our faces 24/7 but our political engagement is diminishing.

Now Simon Bridges as a bridge to sell you.

We need to normalise a political culture based on real relationships, where people can work through their beliefs and thinking about how they want society to be without being constantly bombarded with information and processes that are deeply anti-human.

Social Media – A force for good?

Nick Kelly on the role of social media in the UK election.

Reality kicks in for US trolls.

It has been an interesting few days looking at political reality kicking in on politics and the net in the UK and the US. The first story I read yesterday was in the US, about one of the lying dimwitted conspiracy nutcases who claimed that the 2012 Sandy Nook school massacre never happened, but was […]

We don’t all have to know all the facts and admitting ignorance is no shame but a virtue.

Hate Speech Is an Evitable Evil

Online behaviour like any other behaviour can be modified but this will not happen by itself.

The government has been rightly lauded for swiftly acting to ban assault weapons after the Christchurch massacre, but is its failure to decisively call social media giants to order just as weak and unacceptable as the failure to act on Aramoana massacre back in 1990?

Modern Technology Is Eroding Our Society

People are losing their people skills rapidly and it is having an effect on society.

A long and interesting read in The Atlantic. “The very roots of the electoral system had been destabilized.”

Social media offers a rich tool for profiling voters and targeting election advertising or informal messaging. There’s a good piece on RNZ today looking at the issue. How long before we see the methods used by Brexit and Trump campaigns employed in NZ?

Bill English has an active social media strategy, likely well funded and professional. While most commentators are cringing at it, plenty of people are probably buying the counterfeit Bill.

Preliminary evidence shows how social media giants like Facebook and Google could influence elections. Should we be worried?

Feinstein Doak has a post up with the Top Political Facebook Posts of 2014, and the results are interesting.

FFS: If you are going to confess your foibles to Facebook, then don’t let a low-grade sociopath have access to your dribblings. Not only is it going to be embarrassing to you after you sober up. But you are going to find that every other border line nutter has liked it all over the net. A few simple rules when you are sober will prevent the problem.

Scott at ImperatorFish is worried. A National Party MP’s colleagues have become increasingly concerned about his wellbeing, after he failed for two consecutive days to make a fool of himself on Twitter. Concerns were raised when colleagues of Tau Henare realised that they had not noticed a single social media brainfart from the list MP for over 48 hours. 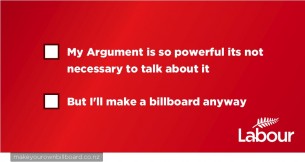