How odd of Todd! A condescending gesture turns into a cry for help.

A chance to choose better

A brief extract from one of Jacinda Ardern’s speeches in Hamilton yesterday. Not just for the next three years but for the next ten – we have a chance to choose better…

Jeremy Corbyn’s full speech to Glastonbury 2017. “Another world is possible…”

Excellent speech from Andrew Little in Parliament yesterday, on the government’s willful blindness to the housing crisis.

Who said it better?

Michelle Obama or Melania Trump? The Republication convention descends further in to farce.

John Key has given a powerful speech on NZ’s housing crisis: “This is an issue that should concern all New Zealanders. It threatens a fundamental part of our culture, it threatens our communities and, ultimately, it threatens our economy.”

A great reception for Little’s speech, and a take-home message that resonates well.

“If there is one thing I am clear on it is this: the next Labour government will not tolerate poverty in New Zealand in the 21st century.”

Twyford on solutions to the housing crisis in Auckland

As Nick Smith flounders about uselessly, here are extracts from Phil Twyford’s speech on solutions to the housing crisis in Auckland. 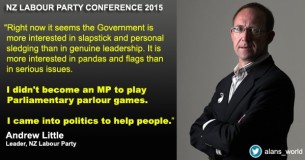 It isn’t that often that we put up speeches by politicians. They’re usually aimed at the general public and don’t really get into the guts of the issues in the way that our activist commenters like to argue at – they tend to be political and in this site preaching to the converted.  However this speech by Phil Goff is exceptional. It was made at a centre looking at China, and looks at the benefits and risks of our current and future relationships with that country. Worth reading

Reorganisation is busy-work for when you can’t think of anything useful to do.