Bridges and flouting the OIA

Simon Bridges tried to block the release of a report on a Kiwirail proposal. The Ombudsman warns against flouting the Official Information Act. But it’s a well established pattern of behaviour with this government.

Ngaro has fronted up with another grudging apology. English should have fired him and it speaks volumes of third-term arrogance that he hasn’t.

It isn’t just third term arrogance. Ngaro is merely the latest example of National’s long history of attacking, intimidating, and trying to silence critical voices and facts. Take a stroll with me down memory lane… 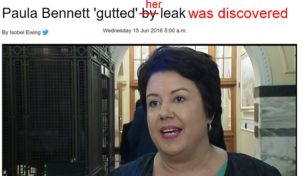 Update: Bennett has admitted that “her office” leaked. She should resign.

The Police’s return yesterday of Nicky Hager’s data, equipment and belongings is – too little and too late – a measure of justice for Hager. But the process doesn’t end there, and open questions remain.

Respected journalist Jon Stephenson has extracted an apology and payment from the NZ Defence Force for their attack on his work in 2011. He is owed an apology from John Key too…

Forty percent of scientists surveyed feel that they are unable to speak out on issues within their areas of expertise because of management policy or concern over losing funding.

Only ACT standing up for free speech?

ACT has withdrawn support for the Harmful Digital Communications Bill. Bravo. Labour, Greens – where do you stand on this badly drafted and damaging bill?

Interesting post from I/S at No Right Turn on the Harmful Digital Communications Bill.

A culture of intimidation

National is leading by example in creating a culture of intimidation and fear. The latest case, a threat to withdraw funding a rape prevention group for speaking out.

An excellent piece by Dame Anne Salmond in the Dominion Post yesterday. Salmond reviews the government’s attacks on journalists, institutions and privacy.

Who is trying to shut down Hager defence fund?

The Hager defence fund stands at over $44,000 and still climbing. But some mean-spirited wingnuts are trying to have it shut down…

The legal defense fund for Nicky Hager is approaching $40,000. Why not help it over the line?

Hager defense fund about to hit 20K – make that 25K

The legal defense fund for Nicky Hager is about to hit $25,000. Why not give a little?

“Conservation Minister Nick Smith is threatening legal action against Fish and Game council members who accused him of trying to gag the organisation.”

Threats to schools over the contents of their newsletters?  The “brighter future” doesn’t like dissent.

Under cover of Christmas, the Nats are following in their long tradition of intimidating journalists, by going after the teapot tape reporter for “costs”.

Once a bully always a bully

Key is now using the police to intimidate journalists at The Herald and at 3 News to keep the “game changing” teapot tapes from being released.  What a surprise!  Not.  John Key and the Nats have a long, long history of bullying their critics and intimidating the media.

The Nats are obviously worried about public reaction to the recent revelations on the role of the SAS in Afghanistan.  And as is usually the case when they feel threatened by a story, the Nats are striking out, trying to discredit or intimidate the source.

The latest Nat campaign to stifle those who speak out against them is in full swing.  A report that a “Third of rebel schools appear to soften stance on standards” goes on to note the bullying tactics being used against schools to achieve this “compliance”.  These tactics have already caused a senior Ministry official in the Auckland region to refuse to participate in the harassment of schools in protest.

The letter warning school boards not to speak out over national standards is an outrage, but John Key and his National Party have a long and dishonourable record of trying to shut down those who speak out to oppose them.