In a shock move, the Christchurch terrorist has changed his plea. Why?

With just over a week to go till the UK General Election, polls (which are questionable in reliability) show the race getting tighter. Expect lots of harsh word and dubious tactics. In all this, political operators shouldn’t forget that real people’s lives are impacted by events like terror attacks. Politicians from all sides need to think about their actions before trying to gain political points.

I’ve used and worked with weapons for large chunks of my life. They’re not there for dickheads. There aren’t any reasons to keep operational semi-automatic weapons in civilian life. Just outlaw them. The conviction for unlawful possession of them requires mandatory imprisonment.

Facebook, Putin, poisoning and Ghouta have all given fairly extensive media coverage of late. Nothing much on Afrin. Afrin has just fallen to terrorists backed by Turkey.

Update: the photo used for this post is of the The Queer Insurrection and Liberation Army (TQILA), who are part of the International Revolutionary People’s Guerrilla Forces fighting in Syria.

A quite remarkable interview of Michael Fallon by Channel 4 News in the UK.

Corbyn on terrorism and UK settings.

Why Islam is incidental.

How (According to The Guardian) a neo-nazi turned Islamist flipped terror narratives upside down.

What is the story?

I’m finding that the way that stories are reported rather interesting and full of hidden bias. Looking at the London attack and the “Hit and Run” stories, you have to ask about what editors and some journalists choose to focus on in stories. They often seem to miss the point about why things happen and what the consequences are.

One border and a world of difference away…

English – “One of New Zealand’s benefits is because we’re a long way away and fairly small we don’t attract too much attention.” Nice contrast to the usual Nat hysterical style. I guess there’s no need for all that domestic spying apparatus then?

Reports of an unconvincing “domestic terrorism” plot, and of further illegal GCSB spying.

Why do they hate us?

658 deaths due to terrorism in Europe and the Americas. 28,031 terrorism deaths in the Middle East and rest of the world.

As is being widely reported, a truck has been used as a weapon to kill around 60 people in Nice, as crowds celebrated Bastille Day. Many shots were fired and the driver is dead. Motives are not yet known, and (at time of writing) no group has claimed responsibility.

Condolences to all family and friends of the victims.

Guardian journalist Owen Jones nails the failure of many to call the Orlando killings what they are; homophobic  terrorism. It’s not an excuse for anti-muslim hysteria, as Trump, Seymour and Peters would have it, it’s the worst single attack on LGBT people since the holocaust.

Coverage and image from The Guardian.

Panama papers – the dark side in a nutshell 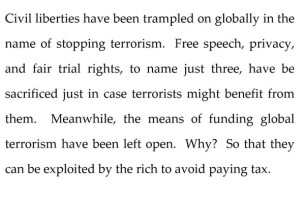 Condolences to all those affected by the horrific bombing in Lahore.

Isis has claimed responsibility for the horrific attacks in Brussels that left 34 dead.

Remember the “jihadi brides” – part of last year’s beat-up about the risk of terrorism in NZ? Yesterday the central lie in the story was revealed.

Graph of the day 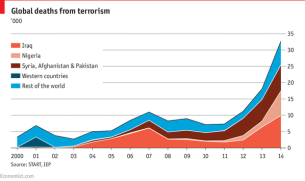 From Hollande’s reaction it seems likely that the terrorists will accomplish their goal.

The French secret service agent who attached the mines which sank the Rainbow Warrior has stated an emotional apology during an interview. While the apology is welcome, it changes nothing.

Be afraid. Be very afraid.

Terrorism in NZ? The Herald was in a frenzy yesterday, because apparently we are a “sitting duck”. But, hang on…

UK PM David Cameron thinks freedom will be enhanced by monitoring everything – something we used to call totalitarianism. We need more encryption and to make sure the internet is built for the people, not the data-miners – be they our security agencies, criminal gangs, or facebook.

The difference between the left and the right

The recent handling of Charlie Hebdo by the Standard and by Kiwiblog provides a startling contrast.  And neatly underlies the reality that the left wing blogs are in no way just the same as the right wing blogs despite what John Key may say.

On Freedom of Speech and Tolerance and Powers of Surveillance

The slaying of staff at Charlie Hebdo and the killing of two police officers will no doubt cause further debate on the extent of freedom of speech, on our relations with Muslims and on the state’s powers of surveillance and if they should be increased.

Condolences feel pretty meaningless in cases like this, but they are all that one can offer.

Is Haron Monis a terrorist?

Would John Key be making reference to terror attacks if Haron Monis was not from the Middle East? Our PM has a track record of jumping the gun on sensitive international issues…

In a land far away from here and behind a curtain of iron, it was said that to understand anything, it was necessary to first of all discount the fictions that were being presented as truth.