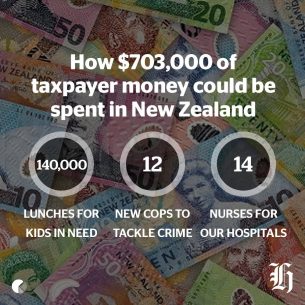 International travel perks for the people who got us into this mess?

Elitist Nats’ heads in the clouds

Wayne Mapp revealed that Murray McCully’s air force flights to Vanuatu cost $65,000 in fuel alone and that he tried to stop McCully. Meanwhile, Key got a free helicopter ride from a photo-op but decided it was a bad look so he paid $2,000 for a 1 hour flight. Well, you and I paid $2,000. It’s always us lesser mortals who pay as Key and co bounce from cloud to cloud.

Own goal by National flunky

Cameron Slater has the inside word on Murray McCully’s $75,000 trip to Vanuatu on a New Zealand Air Force plane that involved flying the 126-seater there and back to drop him and seven staff off, then there and back again the next day to pick them up. This story gets worse the more details come out.

Rortbuster not finished with Wong

Rortbuster Pete Hodgson unveiled yet more information about Pansy and Sammy Wong’s business activities in China on the taxpayer dime in Parliament yesterday. It’s damning material. The Auditor-General had decided not to investigate but there’s every chance she will now or that the Police will.

Corrupt former National minister Pansy Wong has finally done the right thing and resigned from Parliament. Key didn’t want her to go. This doesn’t change the need for the Auditor-General to investigate the abuse of her travel perks. [Update: Key announces March 5 by-election (a very quick response from him having just learnt her personal, […]

A-G sure to launch Wong probe

The Auditor-General seems certain to launch an  investigation into the Wongs’ taxpayer-funded travel as even more  evidence shows the Parliamentary report isn’t worth the paper it’s  written on. A majority of Kiwis want her to resign. Why John Key hasn’t already called on the A-G to investigate, as he did  with Phil Heatley, is beyond me.

Fresh evidence was presented in the House yesterday by rortbuster Pete Hodgson that makes a lie of testimony Sammy Wong gave to the investigation into his and his wife’s travel on taxpayer money. A proper inquiry by the Auditor-General must now be undertaken. There are also questions over John Key’s involvement.

Once again the play is performed. A minister is caught rorting, admits wrong-doing, an investigation is launched, the investigation doesn’t ask crucial questions, it finds no fault just confusion on the part of the poor old minister, the rules are changed. English, Worth, Heatley, Wong… all the same. These farces need a new script.

Wong briefly came out of hiding to answer questions from Parliamentary Services on her abuse of flight perks. Back in hiding now. Key’s still telling her not to talk. But surely she can tell journos what she told the invesigators. Will the report on her corruption be the worst problem for the Nats this week? Or will corrupt David Carter overshadow it?

Where in the world is Wong?

Two Friday’s ago, corrupt Nat Pansy Wong resigns as minister. Key tells her not to talk to media. As if she can’t remember her own overseas trips. Gives her a week’s leave. Wong disappears. Week’s up – no Wong. Where is she? Mallard’s heard she’s overseas. Fundraising for the Nats. Is she using her travel perk?

Pansy Wong has been stood down resigned over her abuse of her ministerial status and perks for her husband’s private business dealings. I expected that Key act ‘relaxed’ and hope for this blow over. That he hasn’t indicates they’ve uncovered something more. Will we find out what it is, or will Key pull another Richard Worth on us? Updates coming.

No, this post isn’t about the 2025 Taskforce, it’s about Rodney Hide’s round the world holiday with his girlfriend on your dime. Heavily censored official papers reveal that on this 12-day, $100,000 trip (not including the salaries of Hide and the two officials who went with him), Hide spent just 10 hours in meetings on […]

Act as we say, not as we do