Requested by the UN General Assembly, the Week will draw attention to the urgent need to better protect pedestrians worldwide, generate action on the measures needed to do so, and contribute to achieving the goal of the Decade of Action for Road Safety 2011-2020 to save 5 million lives.

The Week will contribute to:

Voxy identifies some actions planned for the Week around NZ, with schools, supported by Brake NZ and NZ School Speeds, promoting the “Long Short Walk”.

The United Nations, calling for better protection of pedestrians, is suggesting that participants go for a “Long Short Walk”; here the organisers are calling it Streets for People, to include at risk cyclists, especially children.

According to the Ministry of Transport, children under 15 between 2007 and 2011, accounted for 23 percent of pedestrians hospitalised as a result of motor vehicle crashes. The highest percentage was in the 15 to 24 age bracket, at 25 percent. This age group accounted for almost half our pedestrian injuries and deaths.

Furthermore the highest rate of injuries and deaths between 2007 and 2011 were between the hours of 2pm and 4pm involving those up to the age of 18 when children return home from school. Currently there are speed limits throughout the country applying to school zones ranging from 20km/h to 100km/h. There is no consistent safe speed, that shows drivers a safe speed when passing children who may well be at their most distracted.

This week in NZ, the Streets for People initiative is also highlighting the impact on cyclists of unsafe driving:

… the Ministry of Transport reports that children aged between 10 and 14 years old account for the highest number of cyclist hospitalisations – within the number of hospitalisations of cyclists involved in motor vehicle crashes by hours travelled between 2007 and 2011, based on the New Zealand Household Travel Survey, cyclists between the ages of 13 and 17 are at the highest risk group. And once again the time of day that children up to the age of 18 were killed or injured was between 8 and 10am and from 2pm to 6pm, so children travelling to and from school.

Here in New Zealand from 1997 to 2011 the death and injury rate to cyclists increased hugely. In Europe these numbers are going down. Most European countries apply a 30km/h speed limit in residential areas and outside schools, as recommended by the World Health Organisation. For that reason there are fewer fatalities both of children up to 14 years of age and of the elderly in Western Europe. Shouldn’t this be part of New Zealand’s “Drive Social” campaign, although it will take leadership.

Walking and cycling can be extremely enjoyable ways of getting healthy exercise, as well as being A cheap and environmentally-friendly means of getting from A to B.  It’s better for all in the long run, if these are made to be as safe as possible.  And it is especially important for the well-being of children, that we all develop and maintain safe driving practices. It is also important for those using walkways who are physically disabled, whether or not their disability is obvious to motorists.

However, it’s not just motorists that need to get on board with safer practices.  The people who design roads, walkways and cycleways, need to pay more attention to designs that promote safety.  The excellent Auckland Transport Blog has highlighted some of the non-pedestrian friendly design features around Auckland, as with this post by Mr Anderson.  Many of these features could be avoided with simple changes as for instance with this example in Mr Anderson’s post, which shows pedestrians are an afterthought: 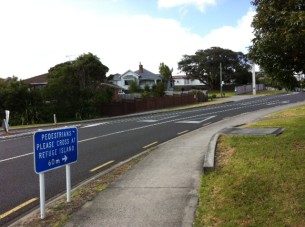 Such careless disregard of pedestrians, can result in some people in a hurry, resorting to jaywalking.