Key is clearly on a roll as he lists the options New Zealand could explore if it decided to abandon outdated ideology and take a more pragmatic approach to growing the economy.

And later she writes

By the time he left Europe to head home and stand for the 2001 election as a National candidate, Merrill Lynch had more than 400 staff in Dublin. It now has 700.

I guess for all his financial genius at deals, Key just couldn’t see what was coming for Ireland and he wasn’t alone.

However in February 2010 John Key was now Prime Minister and fully cognisant of Ireland’s collapsed banking system and financial hub collapse. Nonetheless he was cock-a-hoop about New Zealand following the lead he took when he was London-based head of Merrill Lynch’s global foreign exchange business. He had shifted a lot of the bank’s business to Dublin.

Making New Zealand an international finance centre with “middle and back-office functions” in the funds management industry was one of the recommendations of the Capital Markets Taskforce report last month.

It found the “hub” notion viable but kept the detail of its advice on how to implement the plan out of the report, giving it directly to Mr Key instead.

However in May 2010, reporting for the New York Times, Simon Johnson, former chief economist at the International Monetary Fund stated

Ireland’s politicians, rather than facing up to their problems, are making things ever worse. Simply put, the Irish miracle was a mirage driven by clever use of tax-haven rules and a huge credit boom that permitted real estate prices and construction to grow quickly before declining ever more rapidly.

Not simple enough for our prime Minister it seems because by December 2010 he was publicly venting his frustrations at the slow progress of his Ireland dream. He described the Ministry of Economic development’s desire for appropriate documentation as “absolute rubbish” and that

Economic Development Minister Gerry Brownlee has been ordered to produce an urgent paper covering a zero tax rating for the relevant foreign funds which Key wants incorporated in the November taxation bill and passed by April 1 next year.”

Although the pet hub appeared to be coming to nothing National, with the support of its coalition parties, created part of the dream through the back door through a September 2011 law change. This resulted in the removal of some tax obligations for people not resident in New Zealand through Portfolio Investment Entities (PIE).

Mr Stobo, chair of the $500,000 government-appointed task force committee to look at his pet hub, said this about the law change in September 2011

It represented “significant progress” in establishing the environment necessary for global funds to have back-office processing occur in a New Zealand hub” that reported on the issue last year.

In May 2012 Key backed away from his pet hub. But remember he had still achieved the PIE tax change heralded by former banker Stobo.

Following queries from the Sunday Star-Times last week, Key distanced the government from the controversial aspects of the plan.

“The more costly aspects of the [hub] plan were not seen as an effective use of taxpayer money,” a spokesman said.”

Stephen Jen, from SLJ Macro Partners, and a former global head of currency research at Morgan Stanley, has compared New Zealand’s situation to that of Ireland and southern European nations and has warned it’s just a matter of time before the value of our dollar falls significantly.

I think they completely misunderstand the difference between New Zealand and Ireland, I mean Ireland had a banking crisis and they’ve got massive public debt – ours is at reasonable levels.

Bill considers a climbing public debt from 18 million when he took over, to $55 billion, and climbing daily, is “reasonable”.

Bill’s right about one thing though, they had a banking crisis and we didn’t. But it was not for the want of that greatly admired financial genius John Key pushing us toward our own. Mr Key would have his hub today but for Treasury bringing up some pesky bureaucracy and warnings about high risks.

Heck he would have had it in 2010 if he could have. And yet Jen knows we are not in a banking crisis but still fears for us. Bill had no comment about Jen’s summary of our economy as having a “fragile core” and “a growth model based on debt and credit, low savings rates, and current-account deficits”.“ 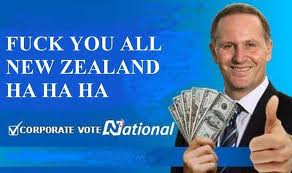 So who stopped John Key? Like the Blues Brothers he seemed to be on a mission from God

42 comments on “Tale of two Irelands ”