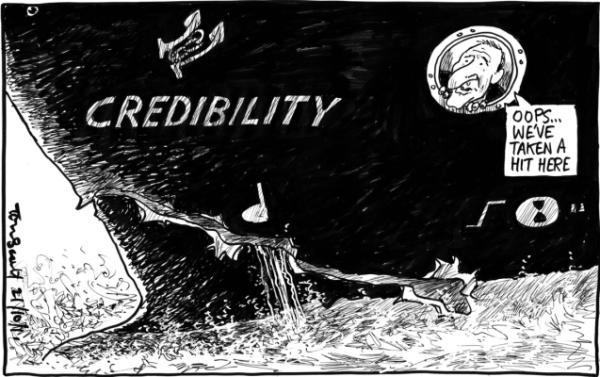 More protests in Tauranga. Simon Bridges blames “out of towners”. That’ll go down like a cup of cold sick with the angry locals. Guess that’s what you get from a first-term MP who has only ever had to ride on Key’s coattails and is now confronted with a real challenge.

You need to really confront the issue of our lack of preparedness for oil spills and announce deepsea drilling won’t be permitted until we are prepared. This silly ‘a container ship running aground isn’t like an oil rig blowing out’ just doesn’t cut it. They’re both oil in the sea and the second is clearly much, much worse.

By asking people to believe that a deepsea oil spill presents no danger given how difficult the Deepwater Horizon was to cap and our manifest inability to respond with timeliness to even a moderate spill, you’re asking people to go against their common sense.

And your blind determination to rush to dig up a resource that a) isn’t going anywhere b) isn’t replaceable and c) is only getting more valuable over time before taking measures to contain the risks just looks reckless.

Every time you run that line, the tear in your credibility gets a little wider.

16 comments on “That sinking feeling ”