When a society goes through trauma, one of the first results is a drop in the birth-rate. People choose not to have children in a time of strife and uncertainty. When good times return, the birth rate bounces back. The pattern could be seen worldwide following the two world wars. In Eastern Europe, where economic and social turmoil followed the collapse of communism, birth-rates are only recovering now. 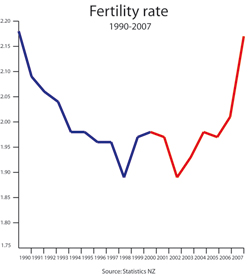 New Zealand also went through trauma in the 1990s: National cut public services, particularly those targeted at children, abolished the Family Benefit, and made ordinary people’s labour more â€˜flexible’ meaning less job certainty, lower wages, and higher unemployment. Young families were forced to depend on benefits that were drastically cut and depend on food-banks. National was elected and young couples got a headache, the birth-rate tumbled.

15 years later, the birth-rate has bounced back on the back of family-friendly policies promoted by Labour and its allies. Paid parental leave, 20Free childcare, Working for Families, B4 School checks, better pupil to teacher ratios, more doctors and nurses, lower unemployment, higher wages, greater job certainty; these have all given couples renewed confidence to start families.