I’ve been traveling around for Christmas/New Year’s. I take the bus for my daily commute so, although I know objectively that petrol is up about 20% in the last year, it hadn’t hit me until I drove about 1000kms around NZ.

The extra cost isn’t actually that much but it’s a still shock when you fill up. My little old car is pretty thrifty, getting about 6l/100km. Which means, with lower fuel economy on gravel roads and being stuck in traffic a couple of times, I used about 80l on my travels. 40 cents more a litre than last year is only $32 – a relatively small part of my Christmas/New Year’s Budget.

I imagine most of you have a similar experience – even if you drive every day, the increase in petrol prices on your weekly budget is probably only the cost of a coffee or two. Yet it’s very irking, even anger inducing, to hand over a small fortune when you fill up your car and remember that just recently it cost $20, $30, $40 less to get the same amount of product. It seems to me that the people who feel the price of petrol most at an individual level because of their car dependent lifestyles are families in the outer suburbs of the cities and provincial towns – and that’s swing-voter country.

And the price of fuel does have a real economic impact. From memory, the rule of thumb is that a 10 cent price rise knocks 0.1% off GDP. Everything depends on cheap fuel to transport raw materials and manufactured goods over huge distances in our globalised economy – increase the cost of the fuel and you increase the cost of everything (to the point where countries’ ability to undercut us with lower wages may soon be overwhelmed by transport costs, ending globalisation).

So, petrol price increases not only hurt the economy as a whole, they cause out-sized personal annoyance. It got me wondering what the political impact is.

I’ve taken MED’s petrol price series and Roy Morgan‘s party support and confidence in government series – the Roy Morgans are fortnightly and the petrol prices weekly, so I have compared the average price for each fortnight with the matching poll.

Let’s start with confidence in government. In these graphs, I’ve inverted the secondary axis with the petrol price on it to make the comparison easier. 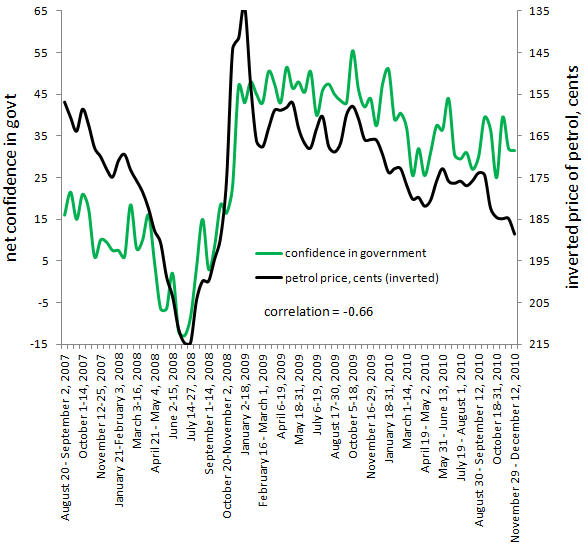 A result of -0.66 is a strong relationship – as you can see in the graph, a rise in petrol prices is strongly matched with a fall in support for the government.

This explains the counter-intuitive fact that support for many governments around the world actually rose during the start of the Great Recession in late 08, early 09. Voters were showing their relief at lower petrol prices.

Now, let’s look at support for the governing party vs petrol price: 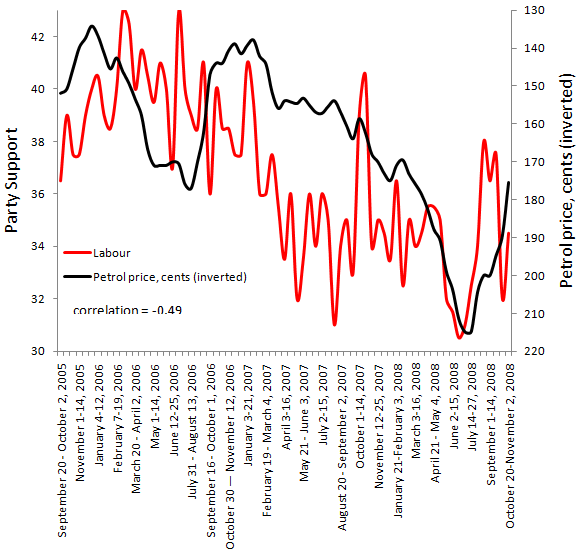 Again, you can see how the two lines tend to move together. -0.49 is another strong link. 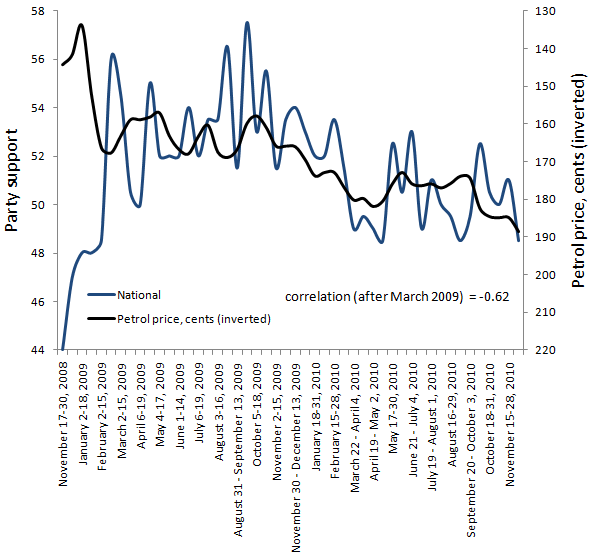 Disregarding the initial run-up in support after National came to office, you can see that support has declined as the petrol price has risen. With a correlation of -.062, the two are strongly linked. The actual relationship may be even stronger but the poll numbers have a lot of ‘noise’ in them, jumping around a lot as you can see due to statistical variation, not just actual changes in voter support.

You can’t say ‘if the petrol price is X the support for the government will be Y’, there are other factors at play too, but you can say, with a fair degree of confidence, that rising petrol prices will mean lower support for whoever is government. Going off the results above, we might expect that petrol at $2.20 a litre will see National’s support in the mid-40s – the danger zone.

That’s bad news for National, of course, as we look to a year where oil is expected to break $100 a barrel again. And it’s another reason to expect a July election – petrol prices generally drop during the Northern summer then increase in the Northern winter due to demand for heating oil.

But it’s also bad news for stable government in the age of peak oil. Will governments continually be thrown out of office after one term by voters angry at the price they’re paying at the pump? And how else might the public express its dissatisfaction as lifestyles built on cheap oil become unaffordable?

It’s also depressing news for those of us who like to believe that voters choose based on policy (and even those who think personality is all that matters) – it turns out the elephant in the room that matters, probably, more than any other factor is completely beyond the control of domestic politicians …. unless they cut petrol excise.