The buck stops with the directors: Pike River

Yesterday, amidst all the other things happening in the news, this appeared with relatively little attention.  Pike River found guilty of negligence, leading to the death of of 29 miners: miners too young to die, leaving behind bereaved families, friends and a mourning community.

Pike River Coal has been convicted of all charges arising from the November 2010 mining tragedy that killed 29 men.

“In this case there were fundamental breaches of the Health and Safety in Employment Act which led to the unnecessary deaths of 29 men,” Judge Jane Farish said in the Greymouth District Court today.

Among all the other implications of this finding, this should be a wake up call to the NZ MSM. Remember when Peter Whittall was uncritically given a platform in the MSM to promote himself and Pike River as a caring company?  And remember when John Key was at his side, condoning the whole PR sham? 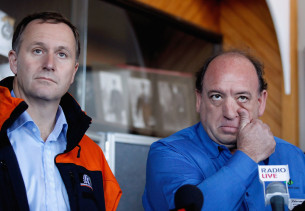 The court findings and the (to be announced) fines, are welcomed with sorrow. One News reports:

Fines dished out to the former mining company in charge of the Pike River Mine will “never” be enough to make up for the deaths of 29 men, the father of a victim says….

But Lawrie Drew, father of one of the victims, said while it was a positive outcome, it would never be enough.

“We have to move on, and this is one good step because someone has been found culpable, but the punishments will never fit what happened,” he told ONE News.

And the ultimate cause is greed, and the company chasing profits – more important to them than the lives of its workers. The CTU is calling for law changes to make company directors responsible for not protecting the health and safety of their workers.

The CTU has welcomed the verdict, and called for a law change to make company directors liable where their company was negligent.

“Pike River Coal has gone under as a failed company that has left behind death and debt. We need to change the law to make the directors personally liable where their company was negligent,” CTU president Helen Kelly said.

“They were in charge, and the company was clearly negligent in their duties to the men down the mine. The current law protects negligent companies and needs to change.

She said that “maximum penalties need to be imposed” to try to bring “a sense of justice” to the families, and added that they should also receive compensation and reparation for their loss.

9 comments on “The buck stops with the directors: Pike River ”