I recently followed Asher Woolf on twitter. I understand that is a nom de plumb. She is a Green Activist based in Melbourne, Australia and her profile says that she is a founder of the Cryptoparty. Wikipedia confirms this and states that the Cryptoparty is “a grassroots global endeavour to introduce the basics of practical cryptography such as the Tor anonymity network, key signing parties, disk encryption and virtual private networks to the general public. The project primarily consists of a series of free public workshops.”

She has a prolific twitter presence with 68.5k likes and has sent over 435k tweets.

She has a clear interest in the rights of citizens against the misuse of big data and recent policy changes at Australia’s Centrelink has attracted her attention and subsequently filled my twitter feed. Her activism is impressive to see and I recommend you have a look at her feed. It is a compelling mix of individual tales of terror over the stress caused and scathing comments about the totally inadequate data matching that has occurred and the complete indifference the Government has so far shown to the issue.

The background is that in pursuit of savings of $4.6 billion the conservative Government in Australia has mandated the use of data matching of Centrelink information with that held by the Australian Taxation Office. Screeds of letters have been sent to previous recipients demanding they justify receiving benefits in the past otherwise repayment will be sought.

The data match is crude, embarrassingly so. And there are lots of false positives. Whereas previously 20,000 letters were sent out a year the number is now 20,000 per week.  And the Government concedes that at least 20% of these are unwarranted.

There is a fundamental flaw in the process. It is matching years that an individual earned a benefit with years they paid income tax, dividing the total taxable earnings by 26 and then presuming that this amount was earned each and every fortnight.  If someone received a benefit for a short period that they were entitled to the data match still says there is a problem if the average earnings are over the permitted amount and a demand letter is issued. If no response is forthcoming within a limited time then the person is deemed to owe the debt and further steps are taken.

There are other identified problems.  The system is flagging cases where employer names and other information have inconsistent spelling across records, and is assuming recipients have more than one job and haven’t declared income

And so people are expected to go through their records up to six years ago to rejustify the receipt of a benefit they had already persuaded Centrelink they were entitled to.

The Government concedes that one in five letters of demand is unjustified. It makes you wonder what the actual figure is. To put that into context if the policy is not changed at least 200,000 Australias will be unjustly terrified in the first 12 months because of faulty data mapping.

It has caused consternation to many including those most susceptible to pressure. In an ironic and cruel twist Centrelink has been tweeting responses to complaints expressing suicidal thoughts with the number for the Australian Lifeline, a service which recently had its funding cut by the Government.

And the infrastructure in place to handle responses is inadequate. Waiting times of over two hours for a response from the telephone system have been reported. The website is incapable of handling a proper response to the letters. Huge cues have been reported at offices. The system is not capable of handling the work generated by the letters. And those that either give up or do not respond through ignorance of the claim will be deemed to owe the money.

To make matters even worse the Government with the assistance of Pauline Hanson’s One Nation recently repealed provisions of the Social Security Act which provided a six year time limit for the collection of these debts.  They could be using older and older and more unreliable data.

Meanwhile in other news … 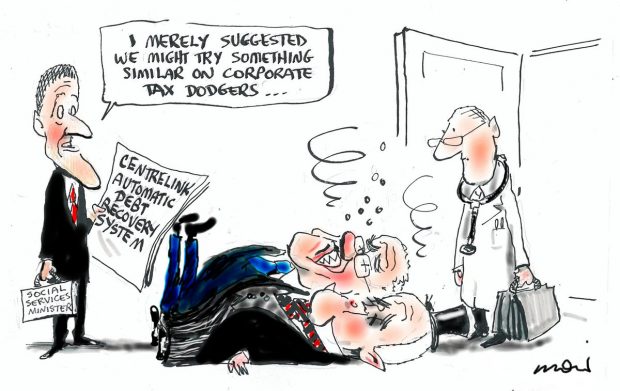 29 comments on “The Centrelink fiasco ”