Ko au te wai ko te wai te au
I am the water, the water is me

Christchurch Dilemmas is a rolling series of documentaries about issues facing Christchurch five years on. Made by independent, award-winning filmmaker Gerard Smyth with backing from NZ On Air and RNZ, the first series asks what to do about the Red Zone, the 440 ha/18 km stretch of land cleared after the quakes that can’t be built on. It presents five short (2 – 4 min) videos on proposals for the area that flows around the Avon/Ōtākaro River in Central and Eastern Christchurch. 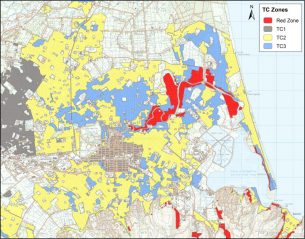 Regenerate is a council, central government and iwi represented organisation set up to replace CERA, and is tasked with consulting the local communities on what to do with the Red Zone land. Ultimately the decision remains with a Crown-owned company and the government is expecting some financial return. Leaving aside the extent to which the people will have an actual say (and the politics involved), the projects presented here are inspiring examples of what NZ is really capable of, given the chance.

Despite the incessant pressure from the neoliberal revolution to commercialise all aspects of life, New Zealanders are still at heart people of the place they belong to, and it’s encouraging to see this rising again in places where life has been stripped bare to make obvious what is really important. Given the opportunity, people care for the land they live in. We still have this. It’s not too late.

In the past few years I have been hearing from Christchurch friends about the re-emerging landscape in the Red Zone, where nature is asserting itself and reminding the people that we are part of the natural world. Wild spaces for kids to play in, foraging, people spontaneously replanting the commons. So it was a pleasure to see the low aerial footage showing large areas where the removal of the built landscape has created a negative space waiting amongst the trees that miraculously survived the demolitions, and then to see all five proposals focused on nature. The film project is also intended as an invitation to join the conversation. Amongst all the trauma of the quakes and of the government response, one of the more encouraging things to emerge has been the voices of Christchurch people with a sense of place. This comes through in the videos and website too, with long time residents, young kids from the Red Zone, and Tangata Whenua all speaking.

“There’s lots of places to build houses in Christchurch, let’s do something else with it”

“The river is starting to tell us what it wants to do. It’s regenerating in a really unique and special way”.

“I haven’t felt so inspired and full of hope about the city since, well, forever! At last, our voices, our people! E hoa, kia a kaha, kia ū, kia manawanui! E te rangatira, tēnā koe!”

In a time when NZ has spent decades watching our waterways being destroyed and are only now just starting to stand up to fight that, these stories are clear beacons of what we can do next.

Here are the five videos,

“In terms of the Red Zone we have to stop thinking of just the land… it’s the land and the water… if we think from that perspective the people are going to prosper”.

Ngāi Tuāhuriri are the hapū of the area and talk in this video about one of the central wetland catchments in the Red Zone, its historical place as a food basket between the Ōtākaro and Heathcote Rivers and the potential for restoration. ‘Mahi nga kai’ means ‘work the food’, and represents a complex set of values, understandings and cultural practices around resources use, and includes being fed in its broadest sense), . Much of this project is already under way.

East Lake is a proposed recreation reserve, with an artesian-fed lake separate from the river. It is focussed on water sports, both professional and recreational, with recreation beyond traditional sports e.g. family barbecues and swimming. It aims for high water quality (so above ‘wadeable’) and would also include the surrounding land for things like walking tracks. It intends to connect in with the other projects.

A NZ version of the Eden Project. My least favourite project because of its inherent commercial focus and high cost (too Think Big), the likelihood that locals will have to pay for access and because eco-tourism is an oxymoron and hugely problematic in terms of climate change. Building large infrastructure and buildings in the Red Zone seems unwise.

“It’s for the people of the city”

“Nature can so some of this itself if we let it”

Encompassing an area that starts in the CBD, the forest park would run along the river corridor all the way to Brighton.  It would provide space for walking, biking, picnicking, camping, being in nature, and would support the emerging landscape that is already recovering from its farming past. An ecological anchor project, very low cost, that would work with existing native trees and current regeneration from seedlings. Established exotics trees would be protected as part of the reality of an urban forest.

Christchurch is the largest city in NZ without an eco-sanctuary. A predator-proof 7km fence surrounding an area that includes Travis Wetland and part of the Red Zone. A wildlife bridge that spans the highway would join the two areas to increase viability of wildlife populations – kiwi, weka, takahe, robins, tomtits, saddlebacks, kaka, kakariki, whio, fern birds, as well as insects and lizards that would also spread out and colonise the rest of the restored Red Zone and beyond.

I don’t know how these five projects were chosen, and there are some obvious gaps. I would like to see all projects audited through a climate change mitigation and preparation filter. There’s been support for years to create food growing, urban farming and foraging corridors within the Red Zone. I also wonder what’s happened to the low income communities from the Eastern Suburbs that were largely ignored in the quake aftermath. Are their voices being heard here or are the people with resources dominating the conversation? Where are the regeneration plans that are socially inclusive?

But the projects here nevertheless present a kind of hope, that while the world falls apart people are increasingly willing to do some of the right things. We are a nation of gardeners, and it’s fitting that Christchurch finds new ways to reinvent and restore itself as the Garden City.

18 comments on “The Christchurch Commons ”