In Parliament there are a number of pictures.  Many of them have been hanging for decades.  Old white men still tend to dominate and there are a remarkable number of overseas people featured.

You would think that as time goes by older pictures should be replaced by more relevant and newer pictures.  While we should always acknowledge our history we should also recognise and respect our present.

The Greens recently asked that a picture of former English Prime Minister Winston Churchill be taken down from outside their Parliamentary offices and be replaced by one from Dunedin artist Marilyn Webb.  Looking at her art I can understand why.  Her art highlights the environment, is quite startling, and is a good example of what the Green Party is about.

And Churchill was not shall we say a nice person.  Johanni Hari at the Independent has this description of him:

Churchill was born in 1874 into a Britain that was washing the map pink, at the cost of washing distant nations blood red. Victoria had just been crowned Empress of India, and the scramble for Africa was only a few years away. At Harrow School and then Sandhurst, he was told a simple story: the superior white man was conquering the primitive, dark-skinned natives, and bringing them the benefits of civilisation. As soon as he could, Churchill charged off to take his part in “a lot of jolly little wars against barbarous peoples”. In the Swat valley, now part of Pakistan, he experienced, fleetingly, a crack of doubt. He realised that the local population was fighting back because of “the presence of British troops in lands the local people considered their own,” just as Britain would if she were invaded. But Churchill soon suppressed this thought, deciding instead they were merely deranged jihadists whose violence was explained by a “strong aboriginal propensity to kill”.

He gladly took part in raids that laid waste to whole valleys, destroying houses and burning crops. He then sped off to help reconquer the Sudan, where he bragged that he personally shot at least three “savages”.

The young Churchill charged through imperial atrocities, defending each in turn. When concentration camps were built in South Africa, for white Boers, he said they produced “the minimum of suffering”. The death toll was almost 28,000, and when at least 115,000 black Africans were likewise swept into British camps, where 14,000 died, he wrote only of his “irritation that Kaffirs should be allowed to fire on white men”. Later, he boasted of his experiences there: “That was before war degenerated. It was great fun galloping about.”

Then as an MP he demanded a rolling programme of more conquests, based on his belief that “the Aryan stock is bound to triumph”. There seems to have been an odd cognitive dissonance in his view of the “natives”. In some of his private correspondence, he appears to really believe they are helpless children who will “willingly, naturally, gratefully include themselves within the golden circle of an ancient crown”.

But when they defied this script, Churchill demanded they be crushed with extreme force. As Colonial Secretary in the 1920s, he unleashed the notorious Black and Tan thugs on Ireland’s Catholic civilians, and when the Kurds rebelled against British rule, he said: “I am strongly in favour of using poisoned gas against uncivilised tribes…[It] would spread a lively terror.”

Do you need any more?

The request is perfectly reasonable.  So what does National, the party that claims to be focussed on the issues that matter to Kiwis do?  They make it the issue of the day and the centre of their media attention.

Collins said the move was outrageous.

“We found out today, this morning without notice, that that the Greens had demanded the removal of Winston Churchill’s portrait from the level two public area of the building here and apparently they’re gonna replace it with something else.

“Asked… if we could have him in our area, our public area, I just think it’s outrageous. I mean, it’s so disrespectful.”

She believed the Greens had moved the painting because they believed Churchill was racist.

“Many great people do have foibles and those people were people of their time, it doesn’t take away from the achievements of Gandhi or of Michael Josef Savage, but what is really important here is that this is a person who was one of the very few politicians who had the courage to stand up against Nazism when so many other people in politics in the UK and even in the commonwealth were happy to give into it.”

Removing the painting was “something that’s deeply offensive,” she said.

And National has even started a petition, presumably to get emails of crusty old conservatives who think that Churchill was a great leader and the world was a better place when Britannia ruled the waves.

Collins posed in front of a blank wall where the picture used to be and was either giving us a peace sign or a blank wall the fingers.  Much hilarity ensued as the image offered a great opportunity for other images to be added. 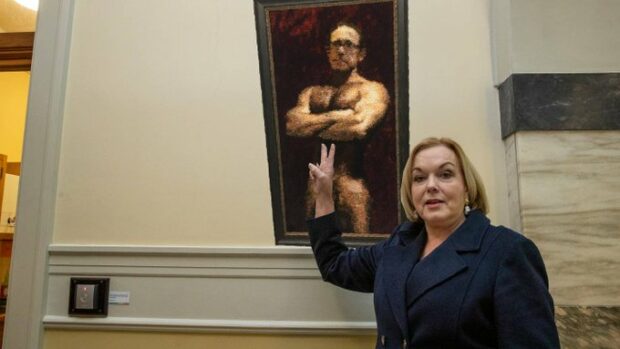 Collins is clearly stuck in her giving back double mode where she wades into the slightest opportunity to engage in culture war battles with bravado.  Her over the top aggressive outrage now only evokes bathos.  All she is achieving is that she has caused former National supporters to look at what she is doing and think WTF?

I wonder what outrage will occur today?

165 comments on “The Churchill picture ”