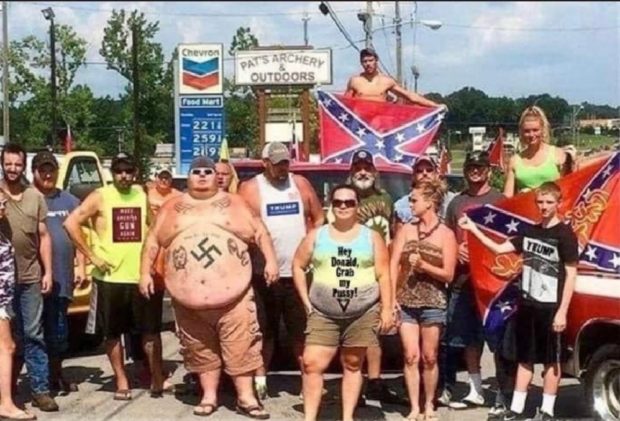 Through much of the world the Covid pandemic is playing out roughly in line with how it was predicted it would.  It could have been better.  China, who felt its effects first, has through determined action managed to get the spread under control.  Current infection rates are in the vicinity of 30 a day which given its vast population is a remarkable achievement.

Taiwan, Australia and New Zealand are, touch wood, in good positions.  The combination of determined Government action, respect for the science, a mostly cooperative population, and being surrounded by water all play their part.

But other island states are not doing so well.

For instance in the United Kingdom infection rates are surging and a new lock down has been imposed.  Startlingly schools and universities are not included.  And it is subject to a vote. It has been reported that some conservative MPs are furious at the proposal and Boris may have to depend on Labour MPs to get the proposal through Parliament.  From Mattha Busby at the Guardian:

Boris Johnson has relented to pressure from the government’s scientific advisers to impose another full lockdown in England, following warnings that the virus could kill 85,000 people this winter and local measures were not sufficient.

After describing the move as “the height of absurdity” that would “turn the lights out” just 10 days ago, the prime minister announced on Saturday that new restrictions – including the closure of pubs and restaurants, and a ban on most international travel – would come in on Thursday and remain in place until 2 December.

The Covid trends for the UK and for Europe are not good although notably in Scotland, which has put in place stringent measures a short while ago, has seen a drop in the infection rate.  The advice from the UK science advisers is that that a two-week lock down is not enough to contain the spread of the virus, and that a longer lockdown is required but clearly Boris thinks this is not manageable. 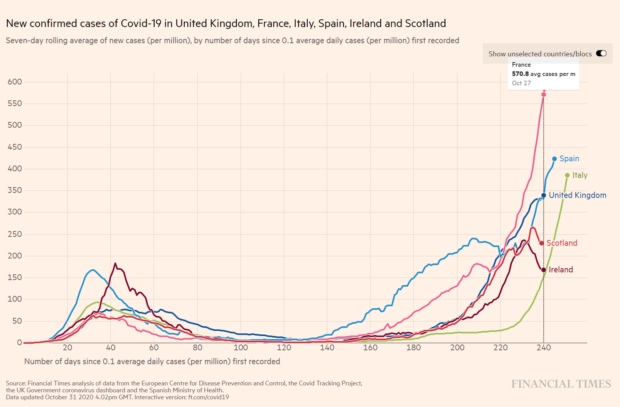 Part of England’s problem is that the track and trace system is, to use the technical term, crap.  From George Monbiot in the Guardian:

Until a working vaccine is released and widely used, our best hope of controlling Covid-19 is testing, tracing and isolating people who might carry the disease. Even after a vaccine is produced, test and trace will remain essential, as inoculation will not be completely effective, or universally accepted.

Today, it’s our only real hope of preventing repeated lockdowns, and other great interruptions to our lives. Yet the English system on which our freedoms depend is a total fiasco. The government has so far spent £12bn on test and trace. But, as a result of catastrophic mismanagement, it might as well have flushed this money down the toilet, as tracing has failed to reach the critical threshold (roughly 80% of contacts) needed to reduce the infection rate. Last week, after a further fall, the figure stood at just under 60%.

To put this in context, £12bn is more than the entire general practice budget. The total NHS capital spending budget for buildings and equipment is just £7bn. To provide all the children in need with free meals during school holidays between now and next summer term, which the government has dismissed as too expensive, is likely to cost about £120m: in other words, just 1% of the test and trace budget.

Because so much about this essential programme has been shrouded in secrecy, it’s not easy to see where the money has gone. But the breakdown of the system appears to result at least in part from its oversight by corporate executives (led by Dido Harding), with no relevant experience in public health and a track record of failure, rather than by professional public servants.

The government has created an opaque and unmanageable hybrid system of public and private provision, in which favoured corporations have received vast contracts without competition, advertising or even penalty clauses. Public health, reorganised in the midst of the pandemic to give even greater control to Harding and her chums, is in semi-privatised meltdown.

He then goes on to detail how Serco workers on minimum wage are being used to deal with grieving family members and to perform track and trace duties that the NHS, when it did the job, had reserved for people with actual public health qualifications.  No wonder the tracking rate is plummeting and the disease is spreading.  But imagine wasting valuable resources on corporations that are just not up to it.

Meanwhile in the US of A new infections have hit 100,000 a day for the first time.  Dr Anthony Fauci warned about this possiblity at the end of June.  But what would he know?

From CNBC two weeks ago:

A frustrated and at times foul-mouthed President Donald Trump claimed on a campaign call that people are tired of hearing about the deadly pandemic which has killed more than 215,000 Americans and trashed Dr. Anthony Fauci as a “disaster” who has been around for “500 years.”

Referring to Fauci and other health officials as “idiots,” Trump declared the country ready to move on from the health disaster, even as cases are again spiking and medical experts warn the worst may be yet to come.

Baselessly claiming that if Fauci was in charge more than half a million people would be dead in the United States, Trump portrayed the recommendations offered by his own administration to mitigate spread of the disease as a burdensome annoyance.

“People are tired of Covid. I have the biggest rallies I’ve ever had, and we have Covid,” Trump said, phoning into a call with campaign staff from his namesake hotel in Las Vegas, where he spent two nights amid a western campaign swing. “People are saying whatever. Just leave us alone. They’re tired of it. People are tired of hearing Fauci and all these idiots.

One of the steps that Trump took to counter Fauci was to appoint another medical “expert”, Scott Atlas, a radiologist and Fox News talking head, to give Trump advice that more aligned to his prejudices.  A la John Key he clearly thinks that if you get expert advice that you do not like then you just keep hunting around until you get the advice you like.

The trouble is however that the expert that Trump appointed, although expressing opinions Trump approved of, soon showed that he, as well as Trump, did not know what he was talking about.

For instance Atlas thought that masks were a waste of time, schools should be kept open, social distancing does not work and herd efficiency was a thing .  Taiwan, New Zealand and Sweden would beg to differ.  If Trump was just after contrary opinions to Fauci he could have hired Homer Simpson.

From Ed Pilkington in the Guardian:

Atlas has misleadingly called into question the efficacy of masks and social distancing, has echoed Trump’s call for reopening schools, and perhaps most controversially has supported the purposeful contraction of the virus by young people to create so-called “herd immunity”.

Public health experts warn that the viability of a “herd immunity” against coronavirus without a vaccine is unknown, given uncertainty about levels and duration of immunity in individual cases. They also say that achieving “herd immunity” would involve millions of infections and unknown thousands of cases of serious illness and death.

Atlas is a former Stanford medicine professor and a senior fellow at the conservative Hoover Institution at Stanford University.

His controversial statements drew an open letter from 78 former colleagues at Stanford medical school, who warned that his advice was dangerous.

“Many of his opinions and statements run counter to established science, and, by doing so, undermine public-health authorities and the credible science that guides effective public health policy,” the letter said.

And the US election campaign is descending into utter chaos.  Armed militia driving four wheel drives and brandishing American flags surrounded the Biden campaign bus and forced it to abandon campaign events.  What is weird is that there was not a police officer to be seen.

And the Republicans are throwing lots of resources into court cases trying to prevent American votes, particularly those with darker skins, from being counted.  This Guardian series of articles has some jaw dropping stories.  And Trump shows his complete disdain for his supporters by staging a rally in Nebraska and stranding some of them after the event in freezing weather.  Expect Nebraska’s Covid infection rate to surge in the next couple of weeks.

Trump has taken to telling untruths recently claiming that the country was “rounding the corner” and that deaths were way down.  These were patently not true.  From Dan Friedman at Mother Jones:

Over the last two weeks, the national average of daily deaths that local medical examiners attribute to COVID-19 has increased by 16 percent. That’s according to the New York Times COVID data tracking project, which is assembled by journalists compiling data directly from state and local health agencies. 1,004 deaths attributed to COVID were reported on Thursday, bringing the seven-day average (the average of reported deaths on each of the last seven days) to 811, up from 701 on October 15. Confirmed US deaths attributed to COVID now total about 229,000. (A separate metric, the CDC’s tally of excess deaths compared to how many people generally die during this stretch in a normal year, suggests that COVID caused far more deaths, nearly 300,000 through just early October.) Johns Hopkins’ COVID-19 tracking project, which separately compiles local data on the virus and reports slightly different numbers, shows the same general trend as the Times, an independent corroboration that deaths are in fact rising. Since September 12, COVID cases have been increasing throughout the US, with especially sharp rises in the Midwest. The spike in cases also means that deaths are likely to increase even further in coming weeks. People who die of COVID tend to succumb weeks or more after contracting the virus.

Ideology is one thing.  Telling outright lies to cover your ineptitude is another.  But this is a clear sign what Trump will stoop to in his desire to hold onto power.  Truth and American lives are secondary considerations.

This could get pretty ugly.  In every nation where the scientific advice is sidelined.

51 comments on “The Covid crisis ”