I am aware that the Herald gives many of us huge angst.  The latest Steven Joyce or Richard Prebble or various Newstalk talkback hosts takes are inevitably complete wastes of broadband space.  And there is no left wing opinions offered apart from the occasional gem from Shane Tepou.

But its in depth analysis can be startling.

Today’s piece on the Covid rollout by Matt Nippert is extraordinarily good and manages to capture the essence of what has been an extraordinarily complex project well.  And it exposes that National’s continuous attacks are lies should be treated with the same amount of respect as Tobacco Lobbyist claims that smoking does not cause cancer.

It is a shame it is behind the paywall.  But I will quote from some of the cabinet papers that the article references.

What is clear in May last year as Aotearoa bet off the first Covid incursion was that vaccines were at that stage a distant hope.  A typical vaccine takes five to ten years to research, develop and approve.  With the immediacy and threat posed by the virus there were multiple accelerated attempts to  develop a vaccine but there was no way to predict when they would appear or even if they would work.

Our past experiences … suggest that there will be strong incentives on manufacturing countries to restrict the export of vaccines until they have ensured sufficient supply for their own need.”

And with the rest of the world, apart from China, Taiwan as well as New Zealand, giving up on elimination it was clear that the only solution the World could entertain was the development of an effective vaccine.

Even when a successful vaccine is developed (provided it can be), the global demand for doses of that vaccine will be fierce. There is no guarantee that New Zealand will be among the first to receive the doses we seek, especially if there is some prioritisation based on assessment of need …

Other countries are already entering into [Advanced Purchase Agreements] with pharmaceutical companies and we will quickly fall to the bottom of the queue if we do not pursue our own arrangements.”

This comment was very prescient with the European Union putting in place roadblocks to the export of the vaccine at the end of 2020 until their supply requirements were met.

The Goverment responded by putting in place multiple orders with different suppliers, betting that at least one would be effective.  It should be remembered that Pfeizer BioNTech did not successfully conclude their phase three trial until November 18, 2020 although Nippert’s article suggests that an initial indication was given the month before.

Chris Bishop has continuously criticised the pace of the negotiations and has said that the Government was too slow.  The officials begged to differ:

The tempo of negotiations is not being limited by our resourcing and process, but rather the fact that we are dependent on the response times of pharma companies that are themselves managing multiple parallel negotiations in different jurisdictions”.

And as pointed out by Nippert no country had their full orders met early.  Pfeizer was actively managing its distribution and trying to deal equitably with all nations although I do have the strong impression that some western nations, battling with huge outbreaks, managed to elbow their way up the list and get supplies earlier.

The vaccine was provisionally approved by New Zealand authorities on February 3, 2021 and vaccinations started soon after that.

The project is incredibly complex.  We have triennial elections where we celebrate if we get over 80% turnout rate, requiring people to pop into one of thousands of organised premises and tick a piece of paper.  To get to the same figure by getting people to go to predominately subregional facilities, get jabbed with a sharp needle by a suitably qualified person and be required to hang around to make sure that no adverse effects were going to happen and then to do it again later I always thought was going to be an incredibly difficult job.

As advised to Cabinet:

But the program has rolled out remarkably well with vaccination figures ahead of what was anticipated, especially recently.

The Government’s decision to go all Pfeizer was inspired, with Pfeizer clearly being the vaccine of preference.

There were numerous comments from the opposition and talk back hosts on how the vaccination roll out was a shambles and noting our relative low level of vaccinations.  Two things need to be remembered, thanks to elimination we did not have thousands of people dying from the virus, and particularly with Delta it is not the early stages of the roll out that is important but the end of the roll out.

Currently New Zealand is mid table in the OECD, and ahead of nations such as Australia, Germany, Austria, Switzerland and the United States. 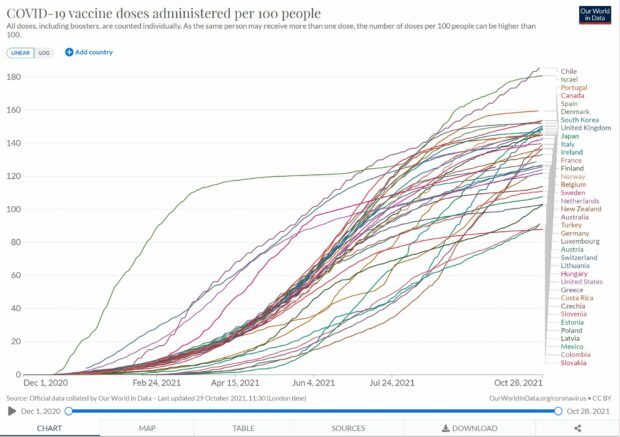 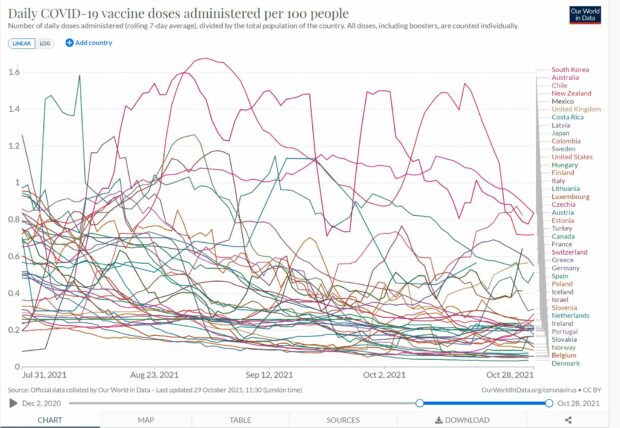 I hope I am not jinxing things but there is reason to be cautiously optimistic that Delta may be on the verge of being under control.  We have lost two Kiwis so far, which is terrible but in numeric terms relatively good.  Farmgeek’s rolling data analysis suggests, that at least for now, new infections and the numbers in hospital have plateaued even though there were fears that daily numbers could have doubled to about 200 in the next few days. 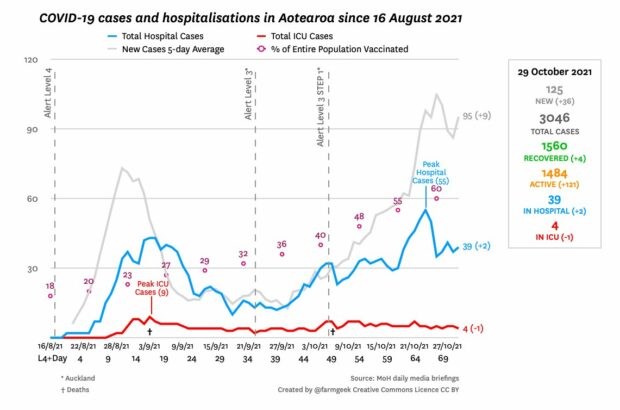 Of course we are not out of this yet.  The spread of Covid into other parts of Aotearoa is of concern and it may be that the whole country will be stuck into orange state for at least the near future.

But for now and despite the overwhelming negativity of the opposition and media people who should know better it may be time to be cautiously optimistic that the vaccination program will be a success.  And that Aotearoa may continue to be among the best performing nations in the world in dealing with Covid.

185 comments on “The Covid vaccine rollout ”