The cycleway & the coming benefit cuts

I always thought the cycleway would come to be emblematic of this government. An unserious ruse, a policy that would have been a joke if the reality of the recession weren’t so serious.

There’s something of the cycleway thinking in the Nat’s benefit cuts agenda – not just the wrong answer to the challenges facing the country, but a calculated distraction.

A cycleway might be a minor tourist attraction for a selected segment of the tourist market but the idea that it could be constructed in time to shorten the recession, or that it would create significant numbers of jobs, was always a sick trick played on the gullible.

Welfare cuts are a similar populist appeal to the gullible. Will it make a lot of difference to the economy or government finances? Ultimately, probably not. No welfare reforms are going to cut off hundreds of thousands of needy families entirely, which is what it would take to save serious money. But any cuts will hurt those families who are already on their bare bones. 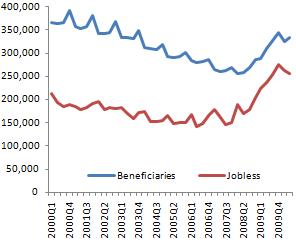 The real way to cut the welfare bill is to have a full employment policy. But this government has never been interested in real solutions. It uses ruses instead – a cycleway to cover a government too busy with tax cuts focus on tackling a recession, welfare ‘reforms’ in place of an economic/jobs strategy.

Like the cycleway, attacking beneficiaries is a distraction from what’s really going on. There aren’t enough jobs, the recession is not really over and rather than dealing with that, this government is focused on carving off an ever large slice of our shrinking national wealth for their rich buddies.

It’s a double insult for the poor and the jobless. Not only are they turned into figures of public spite by a government of the rich, the cuts to their meagre benefits will be pay for tax cuts for the rich.

42 comments on “The cycleway & the coming benefit cuts ”