The decline and fall in National’s polling under English

This election is starting to feel like a rerun of 2002.  I could not believe how bad the campaign was back then.  The campaign launch felt like a funeral and nothing went right.

And when the dust settled National polled 21%.

This is a graph that has surfaced showing relative changes to National’s polling after English took over as leader.  I have not been able to double check the earlier figures for 2002 but certainly during the campaign support for National slid by 9% points.

It is not pretty. 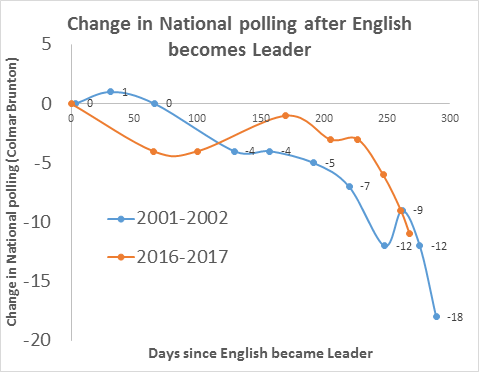 I am not saying that it will match this again.  But a result in the low 30s is not out of the question and is looking more and more likely.

And if this occurs you can bet there will be a leadership spill.

Already the likely starters are showing up.  Paula Bennett is a non starter.  She is also in serious trouble.

The only two possibilities are Nicky Kaye, who worked out the best way to deal with Jacinda Ardern was to avoid debating with her and Judith Collins.