The Feral Rich Are Destroying Our Civilised Society

Reprinted with permission, from Dave Kennedy (bsprout) at Local Bodies.

The Feral Rich Are Destroying Our Civilised Society 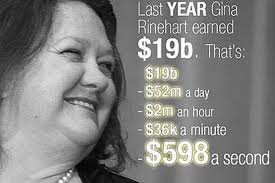 The latest New Internationlist has published statistics regarding the world’s wealthy and the increasing divide between rich and poor. They refer to the “Feral Rich” and ask, “what can we do to stop them?”

New Zealand reflects what is happening in the rest of the world but our income inequality is growing faster than most.

While the rich have got richer around the world, most are paying far less in tax and most governments are struggling to pay for core government services and infrastructure. Many rich, including writer J K Rowling are happy to pay tax because of the support they received from the state early in their careers. They also believe that tax is the price to pay for a civilised society. Would a truly civilised society stand back and watch 25% of their children live in poverty? Would a civilized society have their elderly live in rest homes that can’t pass minimum standards of care and pay the minimum rate for their workers (one of our wealthiest New Zealanders, Kevin Hickman owns rest homes and his personal wealth increased by $15 million last year)?

The fact that Governments and most people of the world struggle to manage on their incomes is not because there isn’t enough money in the world, it’s because the world’s wealth has been captured by a few and they refuse to share. Many Governments are guilty of perpetuating this wealth capture by lowering taxes and not standing firm to lobbyists.

87 comments on “The Feral Rich Are Destroying Our Civilised Society ”