Quietly in the background, David Parker is doing good work. In August last year he produced “National’s Economic Road Test”, an accessible 30 page summary of the mess that the Nats are making of the economy. He’s now released an updated version which can be found here.

One of the topics in the updated document is National’s “fiscal hole” – also the subject of a press release yesterday:

Revenue Projections Drop By Almost $1b A Month

The Government’s tax forecasts for 2012 – 2016 have dropped by almost $1 billion a month since the election, highlighting its failure to boost growth and create jobs, says Labour’s Finance spokesperson David Parker.

“Since the election the Government’s tax forecasts have dropped by $1 billion a month. That’s no surprise when you’ve got 7.3 per cent unemployment. There are 175,000 people who can’t pay taxes because they’re looking for jobs, in addition to the 180,000 who have left for Australia under National’s watch.

“The worst growth rate for any Government in 50 years means businesses aren’t making enough profits to pay much tax. …

“With 175,000 people looking for work and no extra jobs created last year it has clearly failed in its promise to created 170,000 new jobs. The 180,000 Kiwis who have left for Australia in the last four years are a mockery of John Key’s promise that we wouldn’t have to wave goodbye to our young ones.

“National’s economy faces serious problems. Unemployment is at 13-year highs, growth is stagnating and we have a $10 billion external deficit, which is worse than every developed country bar Greece.

“Kiwis want real and innovative solutions to the serious problems facing this country. It’s time for a hands-on government, one that is committed to jobs and growth,” says David Parker.

A $1 Billion hole in projected tax income, and the stalled economy which underlies the problem, are not going to be fixed by John Key acting like an angry chimp in parliament, flinging insults out of his cage. We need a credible, sustainable, equitable and achievable plan for the economy. It should now be apparent to everyone and anyone that we’re not going to get it from National. 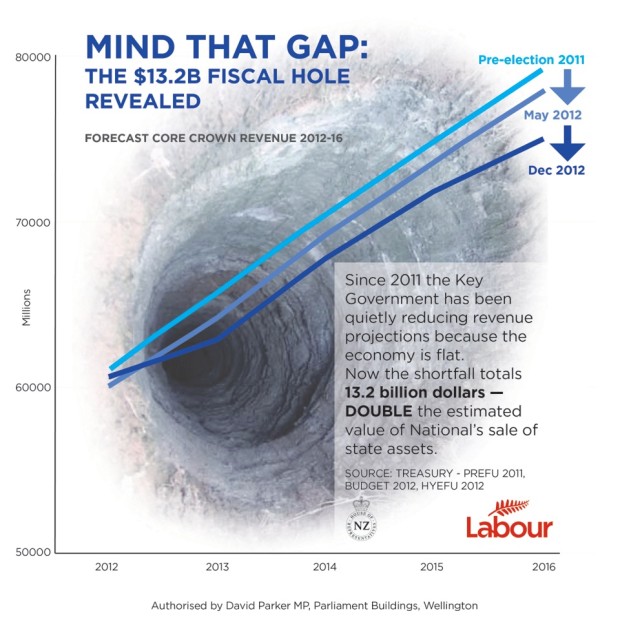