‘The future will be green or not at all’

Yesterday, on Outspoken at RNZ, Craig McCulloch interviewed Jeanette Fitzsimons, Gareth Morgan and Metiria Turei on the future of the Green Party.

McCulloch asked should the Greens move towards being able to go into an alliance with a National government.  This is largely Gareth Morgan’s desire.

McCulloch raised the issue of the Greens saying, just before last year’s election, that they could work with National.  Turei said this was nothing new. They would prefer to be in a government with Labour as they have more in common with them.  But if National led the government, they would continue to try to work with them on selected policies where there is common ground, such as with the home insulation scheme and the cycleway.

This was the second time that this had been the Greens’ approach and she thinks the public are coming to understand this.  She expected that over time Kiwis would gain a better understanding of their position on this. They prefer to support a progressive government that takes ecological sustainability and social justice more seriously.

Morgan says that he is very admiring of the Green Party’s environment policies.  He is frustrated that the current government has been moving further away from extremely important environmental measures. He talks to a lot of people with similar views, but who would never vote Green because “they’re the left of Labour”. He thinks that the Greens need to be equally prepared to go into coalition with National or Labour. 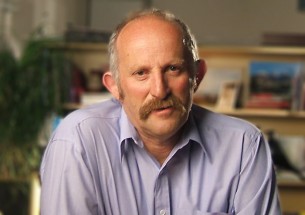 Jeanette Fitzsimons said that the current government is very pro fossil fuel industries, putting our environment increasingly in danger.  They will not compromise on their core economic policies that (allegedly) will bring faster economic growth, but that are destroying the planet. The Greens could not go into coalition with a government with such core economic policies.

Fitzsimons says says sustainability doesn’t fit well into the old left-right divide. Originally the Greens claimed not to be left or right.  Since the 80s, the centre of politics has moved to the right, and now the Greens are clearly to the left of this centre, “but that’s not what defines us”. 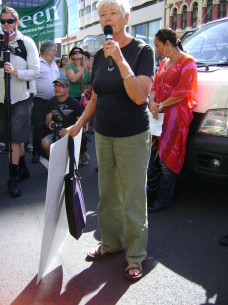 Turei argues that Gareth’s frustration is with National so he should take it up with them.

Morgan counters by saying he is looking for an alternative to National, but he is scared by the Greens being “anti-growth”.

Turei responds that Morgan would have seen from the Greens’ work, like their polices on significant investment in R & D and a strong focus on sustainable business, that the Greens aren’t “anti-growth”:

… what we are is pro the development of a New Zealand economy that utilises our environment in the best possible way for the economic opportunities and development of our whole community. And thereby leading to improved social justice outcomes, for example. There’s a deep connection between these parts of our policy. And we simply will not, and cannot, unless we completely change to a different kind of party, give up on our value set that recognises ecological wisdom, social justice and the economy as an opportunity and a tool for improving on both.

Turei adds that politics goes in cycles, and she expects that over the current term, the pendulum will swing against Key’s government and their very radical policies : e.g. that Nicky Hager’s “Dirty Politics” revelations will gain more traction.  She says that the government is on shaky ground because its policies and values are out of step with those of most New Zealanders.

Fitzsimons adds that the National government would never be influenced by the Green Party policies as they have other options with other smaller conservative parties. She says that, in contrast, Labour is making some steps towards environmental policies aimed at countering climate change. She says she wouldn’t support a Green party that shifted from it’s principles to get the baubles of office. She further says we desperately need a party with principles that they stick to.

in the words of one of them, I can’t remember who it was, “the future will be green or not all“, given the seriousness of the threats facing us.

This is the main difference between the arguments of Gareth Morgan and those of Fitzsimons and Turei.  Other things are covered in the interview, such as Turei stating that she and Norman work very well together and “have each other’s backs”; and Turei, once again, stating her commitment to supporting those on low incomes and to not pull up the ladder after her. 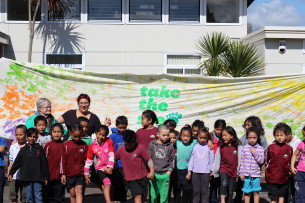