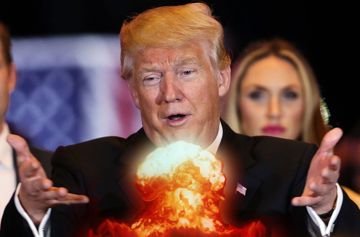 Some on the left thought we had nothing to fear about Donald Trump.  He was just all bluster.  He was saying things to get support amongst his base.  He would never actually do the things he said he would.

As a for instance it was said that there was no more than 5 ppm between his and Hillary Clinton’s policies on climate change. That Trump was merely exploiting a gap left in the political market by the democrats with their fancy science talk and their insistence on fact based policies.  That he would never do what he said he would and the system was broken anyway.

Recent events suggest that these views were overly optimistic and that Trump is going to be as bad as most of us thought, if not worse.  News has broken that the Trump team have been quizzing Department of Energy employees about their research and attendance at climate change conferences with one possible reason being that a pogrom of those who accept the science is to follow.

President-elect Donald J. Trump’s transition team has circulated an unusual 74-point questionnaire at the Department of Energy that requests the names of all employees and contractors who have attended climate change policy conferences, as well as emails and documents associated with the conferences.

In question after question, the document peppers Energy Department managers with pointed queries about climate science research, clean energy programs and the employees who work for those programs. More broadly, the questionnaire hints at a significant shift of emphasis at the agency toward nuclear power, and a push to commercialize the research of the Energy Department’s laboratories, long considered the crown jewels of federal science.

To add to the sense of doom Trump has selected Scott Pruitt to lead the Environmental Protection Agency.  It seems that a desire to protect the environment is no longer a prerequisite for holding this position.  For Pruitt is at the nut job end of the spectrum as far as climate change deniers goes.  Again from the New York Times:

Mr. Pruitt, a Republican, has been a key architect of the legal battle against Mr. Obama’s climate change policies, actions that fit with the president-elect’s comments during the campaign. Mr. Trump has criticized the established science of human-caused global warming as a hoax, vowed to “cancel” the Paris accord committing nearly every nation to taking action to fight climate change, and attacked Mr. Obama’s signature global warming policy, the Clean Power Plan, as a “war on coal.”

Mr. Pruitt has been in lock step with those views.

“Scientists continue to disagree about the degree and extent of global warming and its connection to the actions of mankind,” he wrote in National Review earlier this year. “That debate should be encouraged — in classrooms, public forums, and the halls of Congress. It should not be silenced with threats of prosecution. Dissent is not a crime.”

The only disagreement I can see between scientists is between those who think that the world is stuffed no matter what and those that think that urgent major action may slow down the effects sufficiently so that the human race can adapt.  We are well past the Houston we have a problem stage.

But blind indifference to clear evidence of peril is starting to become a feature of the Trump Whitehouse.  They are refusing to accept security briefings from the NSA.  And in particular they are refusing to even investigate the possibility that interference from Russia and the hacking of Democratic servers helped get Trump elected.  It has been reported the CIA has concluded that Russian hackers broke into both Republican and Democrat servers but that only information embarrassing to the Democrats was released in an attempt to sway the election.

The refusal to even investigate is astounding.  Republican dominated houses conducted 33 congressional hearings into Benghazi in an attempt to embarrass Hillary Clinton but show no signs of wanting to investigate the possible corruption of America’s electoral system by one of its strongest opponents.

Watching events unfold from afar gives the impression of a particularly dark and twisted offshoot of House of Cards is being rolled out.  But this is reality.  At least for the next four years.

15 comments on “The great US climate scientist witch hunt ”