The Green Party plans to protect marine mammals and ecosystems

In Government the @NZGreens will create a blue whale sanctuary and a local ecotourism industry – to replace seabed mining and oil and gas. https://t.co/qFgs6CEq04

The sanctuary will protect critically endangered Blue whales and 37 other species of marine mammals. 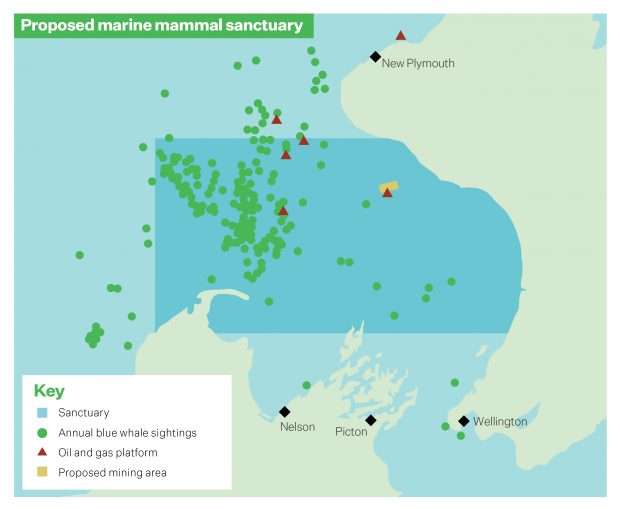 Gareth Hughes explains what this is about:

Some of the media coverage:

I was in Whanganui last night – lots of anger about seabed mining and lots of support for a whale sanctuary. https://t.co/FPgYzvGpcF

Green Party leader James Shaw made the announcement together with Ngāti Ruanui on a beach near Patea, Taranaki, where people formed a human chain to show their opposition to a recently granted seabed mining permit off the coast.

“Critically endangered blue whales are the largest animals on the planet and in government the Greens will protect them, instead of allowing seabed mining and oil drilling near where they feed,” said Mr Shaw.

“Iron sand seabed mining vacuums up the seabed, filters out minerals, and then dumps the mud back into the ocean. For the whales, it’s like someone dumping the contents of a vacuum cleaner onto their dinner plates.

“Thousands of New Zealanders have spoken out against seabed mining and today we are standing with them to say that in government, the Greens will always protect our marine environment.

“We have been working with Ngāti Ruanui and other affected communities to develop a plan that will stop destructive seabed mining from putting blue whales at risk. In government we will continue to negotiate with all interested iwi and other groups to get this sanctuary in place.

“At around 30,000 square km, this will be New Zealand’s largest marine mammal sanctuary. We will finalise the boundaries working with iwi, communities, the Department of Conservation, and other experts.

“Blue whales and 37 other species of marine mammals live in this area, which National has been happy to sell off to the highest bidder to drill and mine.

“One hundred years ago, there were more than ten times the blue whales there than there are now. It’s time to stop taking them for granted.

“Preventing new mining and oil drilling will also reduce the risk of an oil spill on our beaches and coasts.

The Greens released a second policy on protecting whales:

The Green Party in government will send a New Zealand Navy vessel to the Southern Ocean, to ensure Japan adheres to international law when it resumes whaling early next year.