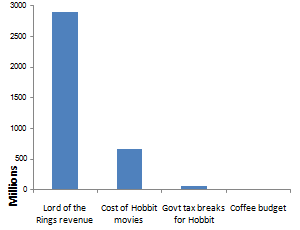 I don’t believe that the ‘crisis’ over the Hobbit has all been a set up from the start but Peter Jackson and Warner Bros have clearly used the situation to their advantage. This has been a troubled project for years and the producers’ are keen to squeeze extra money from the government to reduce the upfront costs.

As the graph shows, the Hobbit is an enormous exercise that will cost hundreds of millions and bring in billions. These numbers totally dwarf the actors’ claims, which Robyn Malcolm described as ‘less than the coffee budget’ (in the graph, I made it $500,000 – it’s invisible beside the other numbers).

You don’t make major decisions about enterprises on this scale because of a vague ‘uncertainty’ created by a few actors asking for a bit more. Hell, the cost of flying Warner Bros executives out here from LA and back in a private jet will probably exceed the extra cost the actors’ demands entail.

The producers’ new talk of filming in the UK or Ireland reveals the lie of the actors’ demands being a deal breaker. After all, in the UK and Ireland actors would get the same wages and conditions as are being asked for here.

But aren’t we scared? The Government is terrified of losing that kind of monetary injection into the ailing economy it is presiding over (it also sees a golden opportunity to put the boot into unions and force through some anti-worker measures).

You must always ask yourself who benefits from ‘crisis’ – who benefits from our fear? That will tell you who is behind it.
Jackson’s Lord of the Rings took tens of millions in tax breaks, and the Government is certain to offer additional breaks to keep the Hobbit here. John Key needs to be ‘the man who saved the Hobbit’ not the man who let it slip away. When he meets with the big US execs next week Key will have his cheque book out and say ‘how much do you need?’ This is the real game, where the producers are playing for big bucks.

Warner Bros and Jackson are cynically exploiting fear (whipped up by the mainstream media) because they know it will open the Government’s purse strings wider. Movie makers, second only to financiers as the ultimate international capitalists, are experts at playing off countries against each other to demand more taxpayer-funded sweeteners.

That’s the real money, not some piddling payments to a few actors but tax breaks worth tens of millions.