The landlords’ lobby group is making a lot of noise over Labour’s, still unannounced, capital gains policy. They claim that rents will go up, the supply of housing will fall, and it won’t stop house prices bubbles. Let’s examine those claims.

A 2003 study showed that most landlords were in the business for capital gain. Many landlords are ‘negatively geared’, their rental income is less than their borrowing costs and so their business model is entirely dependent on being able to sell at a higher price than they bought.

If the return they can expect to make on sale is decreased by 15% due to a capital gains tax, it will reduce, to a small degree, the validity of that business model. The results:

1) people will find being a landlord a less attractive option, meaning lower demand for houses, meaning lower prices (probably expressed as a continuation of the flat nominal prices we’ve seen over the past few years, rather than a nominal fall).

2) those landlords who stay in the business (which will be the vast bulk of them) will attempt to replace that small loss in capital gain return through higher rental income. Whether they will be able to do it or not is a different matter. Price is determined by supply and demand. Capital gains tax won’t decrease the number of houses or increase the number of people looking for accommodation, so supply and demand should not be affected. The landlords said the Budget 2010 tax changes would push up rents too. It didn’t happen. Rents have gone up 1.3% since June last year, while general inflation has been 4.5%.

Lets consider the flow-ons. Houses will be cheaper. Some landlords will be looking to exit the market. Some rents might be slightly higher. This all means that home ownership will become a more viable option. Every rental that is removed from the rental market when sold also removes a household demanding rental accommodation from the market. Everything stays in balance but we have the positive outcome of higher home ownership. I would rather have improved outcomes for the 1 million people currently locked out of the housing market than worry about 200,000 landlords paying tax on their income.

Home ownership has become an unaffordable dream for many, especially younger people, as this graph from the Prime Minister’s Department shows. A capital gains tax would help change that. 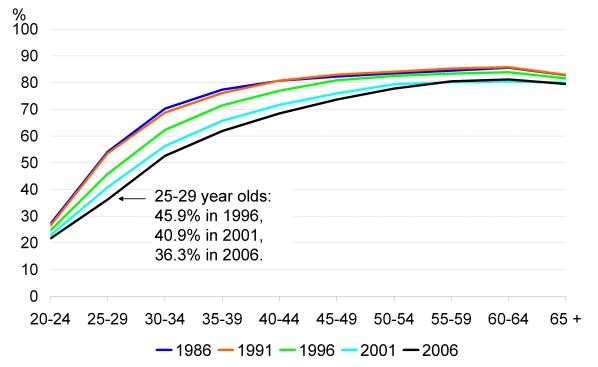 So, the landlords’ scaremongering doesn’t stack up. What about their accusation that a capital gains tax won’t stop future property bubbles?

So, the impacts of a capital gains tax on the housing market would be more home ownership at lower prices without much impact on rental costs, and smaller housing bubbles. The 200,000 property investors get a small tax increase on their capital gains, the 1 million renters get an opportunity to get on the property ladder.

Add to that the revenue which can be used to pay for tax cuts on earned income and not selling our assets, plus the redirection of investment towards production and away from house-trading, and you’ve got a pretty compelling case.

Maybe that’s why nearly every other developed country has been doing it for years.

126 comments on “The housing market implications of capital gains tax ”