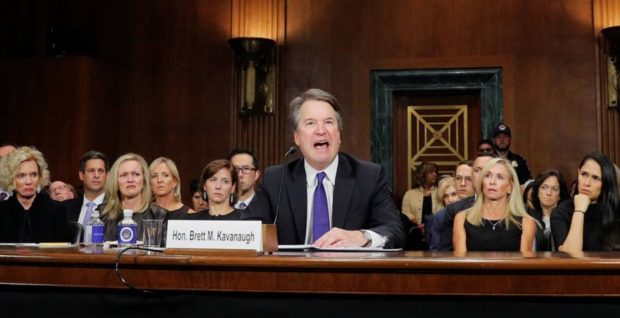 Like political junkies throughout the world I watched some of the approval hearing before the Senate Judiciary Committee on Friday.

Blame it on my three decades in law or my confessed left wing bias but I could not help but notice the stark contrast in the two competing stories.

First there was the testimony of Christine Blasey Ford.  Her testimony casts doubt on Kavanaugh’s suitability for holding one of the most important judicial positions in the United States because when they were young he had sexually assaulted her.

Sure they were young and it was at school but the assault was serious and has left a life long effect on her.

She was a reluctant complainant, she had allowed her complaint to go public but for her identity to be anonymous. That way it would have almost inevitably carried insufficient weight to stop the Republicans appointing him.

But her identity became public and she then decided to testify.

A woman accusing Judge Brett Kavanaugh of sexual misconduct more than 30 years ago came forward publicly Sunday, detailing her allegations about the Supreme Court nominee in an interview with The Washington Post.

The paper said Christine Blasey Ford, a professor in California, reached out to the Post in July as Kavanaugh’s name appeared on short lists to replace Justice Anthony Kennedy, but she opted not to speak with the Post on the record for weeks. As her private outreach to California Democratic Sen. Dianne Feinstein became public over the past week, she decided to go ahead and speak out herself, Sunday’s report said.

“Now I feel like my civic responsibility is outweighing my anguish and terror about retaliation,” Ford told the Post.

It was not a recent invention. For instance she had confided to her counsellor and husband in 2012 that the attack had happened.  Back then it was completely private.  She did not want to say it publicly unless the need to do so was absolutely compelling.

And she did not want to go public.  Funny but victims of sexual assaults tend to want to not have their details broadcast publicly.

But her evidence was utterly compelling.  Straight to the point, clear, concise and damning.

Then Brett Kavaunagh testified.  Kauvanagh must have never run a case before. His shouty insistence that he was innocent backed up by some Republican senators who should know better was really painful to watch.

He admitted liking beer, too much beer, but said that he never had a black out.  He said that he and his friends abided by the recommended alcohol consumption for driving.  As if.

He refused to answer questions and his shouty indignation was a real turn off.  Clearly he has something to hide.

The overwhelming impression was that he was living in some sort of Animal House frat house.

The Republican response was interesting.  They had hired a female lawyer to ask all the questions.  Then part way through they ditched this and started to ask questions themselves which were belligerent defences of Kauvanaugh.  They were clearly rattled by what they had witnessed.

And they miss the point. This was a hearing to determine whether or not Kauvanaugh should be the next member of the Supreme Court, not whether or not he is guilty of the allegation. The decision should be a risk free one.  Candidates should have the highest moral and ethical qualities.  No doubt at some stage the Court will have to deal with cases involving treatment of minors, or how juveniles under the influence of beer should be treated if they then commit offences, or how historical allegations of sexual assault and attempted rape should be handled.  This is why this hearing is important.

The Republicans have delayed the hearing for a week to allow the FBI to investiage the claims not only of Blasey Ford but also of others who have also complained about Kauvanaugh’s behaviour.  It is only for a short time and it probably gives wavering REpublicans the cover to then vote yes.  Unless something startling appears.  But a week will not be long enough.

And if you want an early winner of the Internet thingy of the year, here it is.

63 comments on “The Kavanaugh confirmation hearing ”