Newspaper and magazine readerships continue to plummet despite the end of the recession.

The mags have taken a big hit. Nearly all of them are down. NBR and Investigate are typical having lost 10% of their readership over the last year, on top of losses the year before.

It’s got to the point where they literally can’t give the SST away.

In some Burger Kings and Subways you can now get a free SST with your food. This is a photo taken after midday on Monday in a Subway: 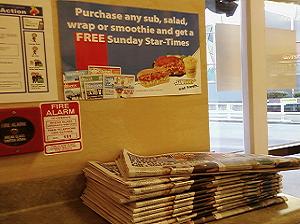 The pile of SSTs that are free with a subway is hardly touched after a day and a half.

I wonder how they’re going to turn things around – more gutter journalism with front page stories about politicians’ children maybe? That’s what the public is crying out for.

As the media becomes more and more sensationalist and lightweight, the defence we always here is that they’re giving the public what we want. Well, last year, over 60,000 more Kiwis gave up reading newspapers. Maybe they’re not delivering what the public wants after all.

63 comments on “The long goodbye ”