as minister in charge of the NZ Security Intelligence Service (NZSIS) and minister responsible for the Government Communications Security Bureau (GCSB), working closely with Key in the prime minister’s new role as minister for national security and intelligence.

I thought it appropriate to re-post something I published on The Standard back in July 2013:

The excellent journalism of the Campbell Live segment (Wednesday July 10, 2013) on the changes to the GCSB bill, and the Key government-Dotcom-GCSB timeline, brought the role of Eric Holder to the fore.  Eric Holder’s connections with his New Zealand counterparts shows how much Holder’s agenda links international surveillance with transnational organised crime and “terrorism” that reaches right into the homes of citizens.  And in doing this, Holder claims the moral high ground in aiming to protect women and children from sexual,and other forms of violence at a personal level.

The Campbell Live programme unfolded a sequence of meetings in July 2011, beginning with a 5 Eyes meeting in Australia that included the attorney generals of the 5 countries that participate in the Echelon intelligence network.  The GCSB is New Zealand’s branch.  The AG’s including NZ Chris Finlayson and Eric Holder, discussed issues of cybercrime, intelligence and extradition.  These attorney generals are also responsible for crime within their own countries. 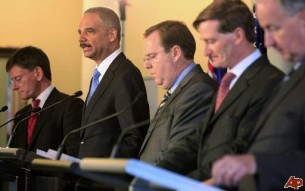 Campbell Live went on to outline a series of meetings in July 2011 that included Key’s meeting with Obama in the US, and the shoulder-tapping of Ian Fletcher for the job as chief of the GCSB. 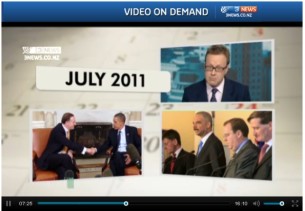 Anne, regular Standard commenter, has helpfully laid out the timeline:

Maarten Wevers (former chief of the Prime Minister’s department) heads off to Washington with Key.

Grant Wormald is contacted by FBI and starts working on Dotcom case around August 2011.

Dotcom’s legal team claim Eric Holder has made pursuit of Kim Dotcom a bit of a mission, as indicated in this article of May 2013:

US Attorney General Eric Holder on Thursday denied allegations from Kim Dotcom that the prosecution against the Internet tycoon was launched to appease Hollywood moguls concerned about online piracy.

New Zealand-based Dotcom launched a “white paper” to coincide with a visit by Holder to Auckland this week claiming the case against his now-defunct Megaupload empire was baseless and did not stand up to legal scrutiny.

In the document, Dotcom’s lawyers argued Washington had bowed to pressure from the film industry to pursue Dotcom for alleged copyright infringement because it was a major contributor to Democratic Party coffers.

Holder rejected the accusation, saying intellectual property theft was “something that we take very seriously”.

Holder has particularly been concerned with combating transnationally organised crime.  His initiative on this was launched by the White House back in 2011.  This White House notice of 22 July 2011 states that the launch will be live in a few days from then.

Join us at the White House for an event to launch the Strategy to Combat Transnational Organized Crime on Monday, July 25 at 11:00am.  This new strategy seeks to build, balance, and integrate the tools of American power to combat the threats from transnational organized crime to our national and international security.  The strategy also seeks to disrupt and dismantle transnational illicit networks and converging threats — and to urge our partners around the world to do the same.

We will have a number of senior U.S. officials on hand to speak about the strategy and how we will carry it out, including:

This is a broad initiative linking the internal and external US security with their “partners” around the world.  This is further elaborated on by Holder in his speech at the University of Auckland on 8 May 2013.  This speech is full of hypocritical propaganda about the US authorities being the upholder and defender of “democracy”.

For the United States, and for our Quintet allies, these meetings present an important chance to exchange ideas and share expertise; to advance the principles of peace, security, and equal justice that form the common foundation for our respective legal systems; and to explore strategies for working together – to address both domestic and international challenges – in order to build the brighter, safer future that all of our citizens deserve.

From combating cybercrime, terrorism, and human trafficking, to fighting corruption and protecting our citizens from exploitation, abuse, and violence – together, we’ve made significant progress on a variety of fronts. And this week, we’re sharing best practices for protecting some of the most vulnerable members of society – and prosecuting those who commit acts of sexual violence against women and children. Together, we will examine how we can improve domestic investigations and prosecutions of these serious crimes, as well as how we can increase our joint response to transnational sexual violence – including in the contexts of human trafficking, online child pornography, and armed conflicts.

He goes onto to talk about the Boston marathon bombings as a justification for widespread surveillance incorporating the NZ legal and crime-fighting services.

Undoubtedly sexual violence against women, and child pornography are significant issues that need to be understood, prosecuted and prevented.  However, linking this with “domestic  terrorism” coming from within immigrant communities, provides the state a (hypocritical) justification for violating citizen’s privacy within their homes.  Systems for combating crimes within the nation-state, and of a personal nature should be separated from surveillance that undermines democracy.

Not in the name of “women and children” and democracy!

In May 2013, 3News reported on Chris Finlayson’s role, linking international crime with domestic crimes of a sexual nature:

They [attorney generals] will share information on approaches to addressing historic allegations of sexual assault, and how courts deal with fair trial rights and supporting complainants and witnesses giving testimony, particularly in relation to sexual violence in indigenous and immigrant communities.

The same Attorney General that is responsible for issues of crime and justice within NZ, should not have so much responsibility for arrangements within the 5 Eyes network, and for the GCSB’s role within it.