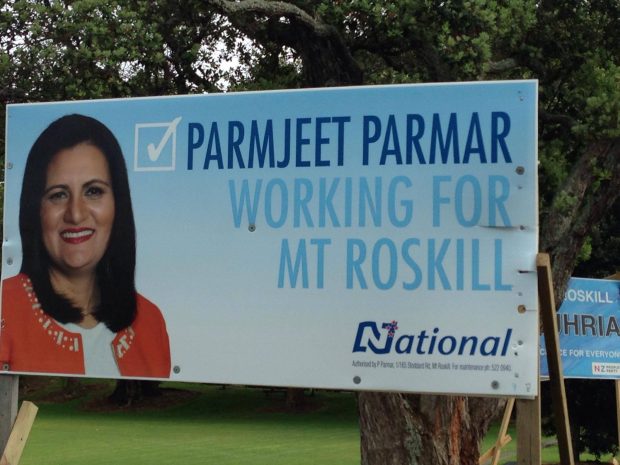 There is one week to go before voting in the Mt Roskill by election concludes and it is getting very interesting for all sorts of reasons.

There is a poll suggesting that National’s candidate Parmjeet Parmar is struggling despite the Government’s current polling.  If this bears out in the result the lesson will be that nothing beats a good ground game and a quality local candidate and Labour has both.

Michael Wood is streets ahead of Parmar in quality.  He has strong local links to the electorate.  He lives there with his family, he chairs the Board of Trustees for his kids school and he represented it on the local board for the previous two terms.  And he has strong progressive ideals which will go down well with the electorate.

In comparison Parmar is clearly struggling.  She lacks any sort of emotional intelligence.  As said by Simon Wilson:

Parmjeet Parmar is a cold fish. This is unusual for an MP: good EQ, or emotional intelligence, is generally a prerequisite for getting into parliament. But I’ve watched her at various events: she doesn’t introduce herself to people and nor does she seem to have those “how are you, do tell me about your problems” conversations. When she takes the microphone she says the dumbest things and she doesn’t seem to grasp why an audience might get upset about them.

Wilson also comments on National and John Key distancing themselves from Parmar, something I mentioned in this earlier post.

Does Parmjeet Parmar care? She should, and not just because she’s going to lose: Labour has a poll that puts their candidate, Michael Wood, 30 points ahead, at 58 to 28. That’s a spectacular fail in an electorate where National won the party vote in 2014 by 2000.

Worse for her, she’s been abandoned. Very few front benchers have turned up to support her and there have been no policy announcements that she could use in her campaign.

To add to Parmar’s perils One News has reported on the strange case of how the police have mislaid a horse shoe allegedly thrown at a resident by a perhaps self confessed right hand man of Parmar.  From Onenews:

An Auckland man claims to have been harassed by a group of men who said they were associates of National’s Mt Roskill by-election candidate Parmjeet Parmar.

Kriti Yatri says that after a dispute with three men at a pedestrian crossing in the Auckland electorate, he was threatened.

“He got out of the car and he said do you know who I am? – I said who? He said I’m the right hand man of Parmjeet Parmar,” Mr Yatri said.

The men then allegedly followed Mr Yatri home and threw an unusual – and dangerous object at him – a horse shoe.

The horse shoe reportedly missed Mr Yatri, and the men fled the scene.

Parmar denies knowing who the men are, despite being shown a photograph of them captured by CCTV.

But here is the strange thing.  Mr Yatri laid a complaint with the police about the incident.  He followed it up this week but was told that the police have destroyed the horseshoe.

You would think that the police would treat an allegation involving supporters of a Government MP to be treated with a certain amount of seriousness.  Destroying the primary piece of evidence is reckless at many levels.