The myth of upward mobility

Yesterday, we looked at what a vastly unfair and unequal system capitalism is.

The control of the fruits of production by the few means that wealth accumulates to them and the rest of us get a pittance. The wealthiest 10% of people own over half of the wealth of this country – net worths of $650,000 each (actually, a small fraction of them will control most of that wealth too). 50% of us have just 3% of New Zealand’s wealth amongst ourselves – with average net worths of $7,000.

But a lot of people have the notion that although they’re being screwed now, it’s OK because a) it’s the ‘natural’ order (I’ll come back to that some time) and b) one day they’ll be the ones doing the screwing.

It’s a myth. If you’re working class or middle class odds are you’ll stay working class or middle class. And the wealthy nearly always stay wealthy. This Stats NZ study looked at the movement of people among income deciles over a five-year period (2002-2007, but there’s no reason to think it wouldn’t be the same over any five-year period).The size of the circles is the percent of people who had been in each decile in 2002 who were in a given decile in 2007: 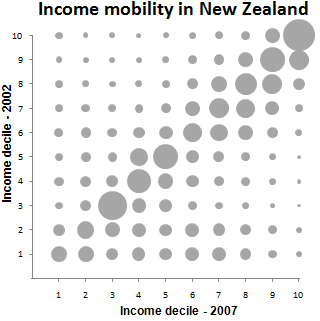 As you can see, most people are in the same decile five years later or very close to it. There’s some mobility among the lower deciles and some mobility among the higher deciles but very few people (only 18%) who were in the 10th (richest) decile in 2002 were below the 8th five years later. Only 10% of people who started off in the lower five deciles made it into the top two or three.

In fact, the mobility you can see is largely a factor of life-cycle – students moving into high paid jobs etc. The study breaks down the age groups and income mobility is very low with life-cycle movement taken out.

So not only is our political economic system designed to concentrate wealth in the hands of a few people, who those people are doesn’t change either. If you’re not one of them now, the odds are you never will be. So the question arises – why support a system that steals the wealthyou produce with your hard work and gives it to them? Are the crumbs that fall from their table enough?

62 comments on “The myth of upward mobility ”