The new government and the TPPA-11

Professor Jane Kelsey was interviewed about the TPPA on bFM last week, giving an update on where NZ is at with the agreement.

Kelsey said that when Trump withdrew the US [Jan 2017] the remaining 11 countries, including NZ, then started to look at how they could retain as much of the existing text in a new agreement. There is meeting on Monday for this, which raises the issue of what the new government should do. Decisions are expected to be made at the APEC meeting in the second week of November.

Kelsey outlined some of the then Opposition’s concerns

In addition to those issues, NZ First also raised this:

And a further issue from the Greens:

Asked if Labour in government will be less critical of the agreement Kelsey expressed disappointment that the coalition deal between Labour and NZ First doesn’t explicitly state what they will do about the TPPA. Jacinda Ardern has said they would revisit parts of the deal eg the residential property issue and the rights of investors to sue. Kelsey says we have to take them at their word on that. But she also says we need to remind Labour what they have said in the past about the TPPA – that it is not acceptable in its current form or with minor tweaking.

Kelsey is suggesting that Labour set up an independent economic inquiry to any agreement. This would entail two levels.

One is that whenever an agreement is proposed there needs to be a robust analysis of the implications of the agreement. This would inform the mandate taken into the negotiations, which would need to be revised over time. It should be contestable, and cover the broad range of issues (the TPPA has many, the National government didn’t do an analysis of most of them). At the end of the negotiation process there needs to be an in depth and independent analysis.

The second level is what Kelsey calls a first principles review of NZ’s approach to international trade and investment negotiations. Because the world is changing these agreements are no longer seen as the orthodoxy but outliers. We need a mature and open discussion in NZ about our position given the international rethinking about these kinds of agreements.

When asked about the negotiations being done in secret, Kelsey said she hopes that Labour will be more transparent and open about negotiations.

‘Before the new government can decide its position on the Trans-Pacific Partnership Agreement (TPPA), including whether it would genuinely boost exports and provide a net benefit to the country, Labour needs to address its own criticism that there is inadequate evidence to support even the original deal’, says University of Auckland law professor Jane Kelsey.

Text of Labour’s minority viewpoint in the select committee report on the TPPA is in the link. It covers concerns about sovereignty, inadequate modelling, uncertain gains, and a conclusion that ends with this,

The TPPA will have ramifications for generations of New Zealanders. For their sake, we should not so lightly enter into an agreement which may exacerbate long-term challenges for our economy, workforce, and society.

So that’s a bit of an update. I’m also disappointed that there wasn’t clarity in the coalition agreement (PDF, I can’t see anything in there at all about the TPPA). There are many exciting things happening with the new government, and we need to take some time to celebrate the positive changes that are going to happen as a result. We also need to pay attention to the holes in the government’s platform.

It’s easy to become complacent with all the feel good and assume that everything will be ok now. I wish we had more time to celebrate before tackling thorny issues but the TPPA is a hugely important problem for NZ on which many of the other issues on the progressive agenda depend. And the negotiating process won’t wait for us – there are just over two weeks until the finalisation of the TPPA-11.

These are Labour’s five bottoms lines from 2015, 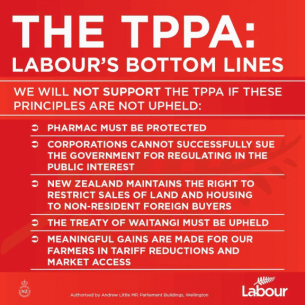 There is also this from Labour’s website. It doesn’t have a date on it but I assume it is from during the election campaign – Labour’s position on the TPP.

In September the citizens campaign group It’s Our Future released their own ten bottom lines, and a report card on the various political parties, 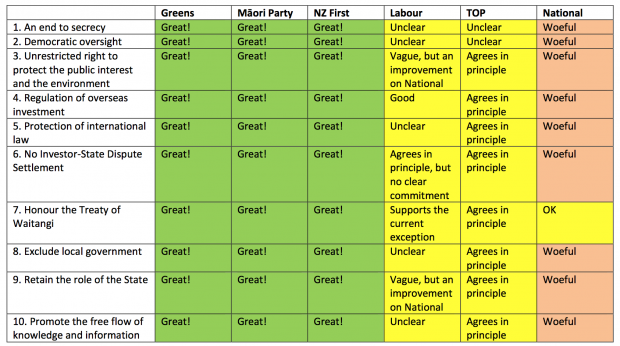 Ardern has said that while they would negotiate hard on the housing and investor dispute issues, she wouldn’t go into detail now because she didn’t want to undermine their bargaining power. I’m hoping that despite the current focus with the media on the residential land issue that they will also include non-residential land.

But beyond that, I’m nervous. The time frames are too tight, and many people are saying that renegotiating in a meaningful way at this late stage (or at all) would be very difficult. I also don’t like what is essentially a ‘trust us, we know what we are doing’ approach from Labour. Our trust needs to be earned, not just because of the betrayals from National in the past nine years, but because Labour has its own history. We need Labour to start demonstrating now that they are in fact an open government that will listen to and take heed of the people for whom they govern. Rushing into the TPPA-11 would not be a good start.

On the positive side Ardern has said “she would not be forced into a TPP11 she did not agree to”. It’s technically possible for Labour to renegotiate. I’ve seen informed Labour supporters say that Labour will do good on those things, but I also know that Labour, including Ardern, have been too vague with the public for something so important. It’s the vagueness that bothers me. The problem for NZ is we don’t really know where the bottom lines are any more, nor the implications of signing into the TPPA-11 even if the main issues that concern Labour are resolved.

It’s Our Future have an open letter petition at Action Station, urging Labour to slow down the TPPA process until NZers have had a chance to have their say. They are also suggesting that the government needs time to develop a new and appropriate trade policy for NZ.

I just signed the open letter to PM @jacindaardern re #TPPA11 https://t.co/ud9fjvs7VK via @actionstation