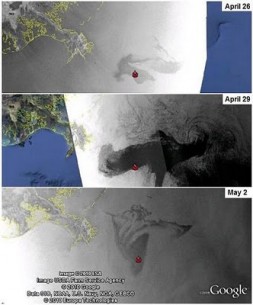 We’re in the middle of another slowly unfolding oil disaster. On April 20 the “Deepwater Horizon”, a British Petroleum oil rig, exploded and sank in the Gulf of Mexico, killing 11 workers and starting what is fast becoming the the largest oil spill in history.

This oil spill ‘the bad one’ â€” recipe for disaster

WASHINGTON What makes an oil spill really bad? Most of the ingredients for it are now blending in the Gulf of Mexico.

Experts tick off the essentials: A relentless flow of oil from under the sea; a type of crude that mixes easily with water; a resultant gooey mixture that is hard to burn and even harder to clean; water that’s home to vulnerable spawning grounds for new life; and a coastline with difficult-to-scrub marshlands. Gulf Coast experts have always talked about “the potential for a bad one,” said Wes Tunnell, coastal ecology and oil spill expert at Texas A&M University-Corpus Christi. “And this is the bad one. This is just a biggie that finally happened.”

GULFPORT, MS (WLOX) – Louie Miller with the Sierra Club said, “Unfortunately, the genie is out of the bottle with this oil spill, and I don’t think I’m overstating the case by saying this is America’s Chernobyl.”

“The news from the Gulf of Mexico oil spill is not good. If the NOAA estimates are right about the size of the spill it could dwarf Exxon Valdez”

I was going to try and summarise the sequence of events since the explosion, but the Wikipedia page is great, so go read that instead. Containment and early attempts at cutting off the leak (a massively difficult task) have failed, and last ditch measures are about to be tried. (Oh – and check out the NZ connection.)

This is an environmental catastrophe of course. It will also be considered by most to be an economic disaster both caused by and exacerbating peak oil.

It is because of oil depletion the limits of technology were stretched to drill in deep water in the first place – Deepwater Horizon well was the deepest in history. This disaster is going to inhibit new exploration and development (“Gulf spill spells uncertainty for new drilling“, “Deepwater Horizon oil spill sparks calls for $10bn levy on BP and drilling ban“). This will impact on the peak oil timeline. Significant supply shortfalls were already due by 2015 according to American military estimates, the crunch just got a bit closer.

But there could be a longer term upside. If only the world could use this event to trigger a serious consideration of a post-oil future. Why wait until we have wrung the last drop of oil from the screaming planet? Why wait until we run out of time completely? Why leave ourselves open to even more disasters as ever more aggressive extraction techniques have to be deployed? Start the change now! Start the move to renewable energy, reduced CO2 emissions and sustainable living now. Let some good come of this disaster.