The political honeymoon that keeps on ending

The post took off.  There were over 600 comments made and multiple social media interactions with the post.  It seems that the basic premise, that there was an attempt to build a negative media narrative about Labour, was accepted.

Recent media about the latest Colmar Brunton opinion poll also made me think about what to me were very crude attempts to manufacture a negative narrative for Labour.  There was this doozie from National’s pollster. 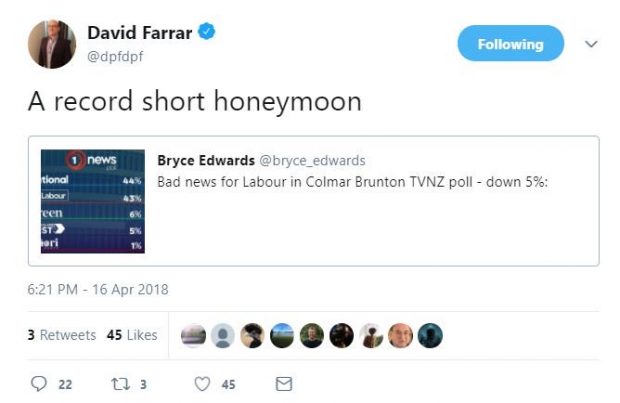 But the concept that the honeymoon is over is something that he has pushed before.  Like last December. 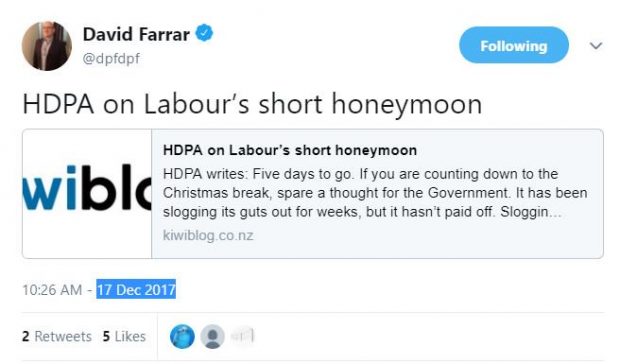 The Colmar Brunton poll has excited comment that Labour is in trouble.  But I am not sure why.  Yes Labour’s support has dropped back by 5% points.  But it had surged by 9% points in the previous poll.  It felt like that poll was too good to be true.  And this poll result was a correction.

Labour’s result was 4% points above its December 2017 result.  I hope there are many other instances like this where Labour’s honeymoon is claimed to be over on a gradual increase in polling.

The combined support for the three Government parties went up by 5% at the last poll and down by 2% this poll.  This is hardly crisis territory.  In fact given the negative media the Government has had recently the drop was remarkably small.

So why does the media insist on running National’s lines?  There are the usual suspects including this chicken little impersonator insisting that the sky is falling down on Labour.  Dear Mike.  Like it or not we live in an MMP environment.  The Government’s support is stable.

Of course the big headline is the debut of Simon Bridges in the preferred Prime Minister stakes.  10% is not good.  Successive labour leaders struggled on or above this figure.  And despite the claims of some that Bridges is doing well it is clear that he is really struggling.  You just have to tune into Parliament during question time to see that Ardern is streets ahead of Bridges.

News of this Government’s entering into a terminal stage are terribly over stated.  Ordinary people prefer that our elected leaders actually concentrate on the big issues.  Lets hope the media follow this.  There are some very good examples of in depth media analysis but there are far too many people interviewing themselves.

43 comments on “The political honeymoon that keeps on ending ”