The prince and the pea

I have pointed out before that Bomber Bradbury is wee bit unsuited to the two way dialogue of the blogs. A fragile prima donna who doesn’t like to be contradicted by the people he gallantly slags off in his routine piques of bitchy ranting.

As the editor of The Daily Blog has so far chosen not to publish Scoop’s response it is included here below.

Martyn,Please consider this comment a right of reply. I expect it to be published.

This is the second time in a couple of months that you have decided to speculate about Scoop’s imminent demise based on gossip in a post framed in innuendo.

To be clear. Scoop is not about to fail. And Scoop is part of the future of news in NZ. Scoop’s “Operation Chrysalis” project is about succession, finding a sustainable path for the business for the next decade. As you know we live in difficult times for the monetisation of independent free and progressive news, but it is clear to anyone with eyes that Scoop shows more promise in this space than anyone else in the NZ online space.

Specifically Scoop has a monthly audience of 500,000 unique visitors (roughly 10 times that of this publication), publishes 1000 items of content a week – including significant quantities of original journalism as well as press releases from unions, political parties, NGOs and progressive activists. We have a database of close to 1 million published and indexed pages and more than 4 million incoming links.

Scoop employs 8 staff and turns over 100s of thousands of dollars in revenue each year.

Scoop would appreciate it if The Daily Blog, as a fellow traveller in the online news and commentary space, would desist from publishing reports which are intended to damage Scoop’s business, something which it is presumably doing for self-serving reasons.

Now that looks like a perfectly legitimate dissenting comment to me. The type of comment that if I saw it in the autospam from someone banned, I’d pull it out and publish on one of my posts even if they were slagging me off. Expecting respect for intelligent dissent on the net means that you have to tolerate it yourself. But clearly Bomber has more in common with an aloof aristocracy than he has with the dissenting disagreement that most of us are willing and expect to tolerate.

I’d suggest that if Bomber has such a glass ego that he is incapable of taking such mild criticism that he turns off the comment section. Or better still, that he removes himself from moderating and gives it to someone with less of a problem with dissent. He isn’t very good at recognising the difference between legitimate criticism and trolling.

But hey, this is a net. If someone is acting like a fool, there are many easy solutions. Here is one traditional route used through decades of the net. Stifling dissent in the way that bomber has been doing demands that others on the net publish it – simply to piss him off and educate him about the personal costs of being a prince on a pea.

If you feel that Bomber has moderated out one of your legitimate comments make sure that it is saved and send it to me with the context. I might publish it. I might even add some commentary….

Updated: Bomber had to go for broke with his response to this post. A bit silly really. Here is a summary

r0b dug out mickysavage outing himself as Greg Presland back in 2010. Also that contrary to Bomber’s ever knowledgeable assertion that nobody knew about Micky outing himself. 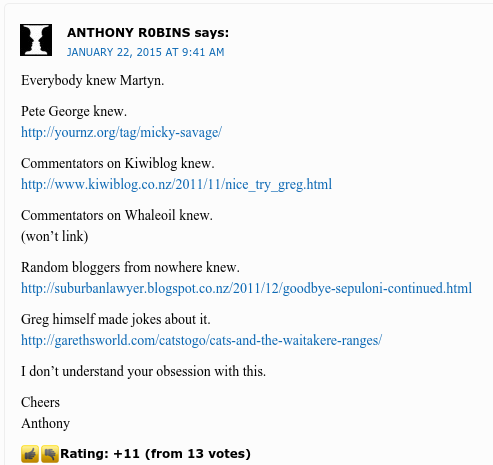 Ouch. Let me remind people that making assertions about facts with the ever polite r0b is not something you should do lightly. It really pays to check your facts first.

I pointed out that that we have never asked guest posters to check on rebuttal or any other types of posts. Authors don’t bother with each others posts.

About then Bomber stopped with the facts ending with this masterpiece. 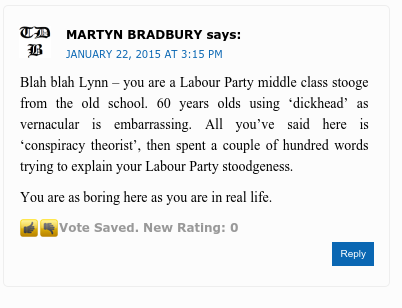 Ok, I’d count that as a full blown tantrum from a bit of fatuous bigot. In fact his caricature of a purely critical socialist rather reminds of some other fictional poseur where you scratch the surface to find something that has more bombast than substance and where what appears under the shell is not too pleasant.

And what is this fool talking about? I started using “dickhead” as a surrogate when I got left the army basic training in 1978 with a bad and objectionable habit of saying “motherfucker”. I can’t quite see why bomber thinks this is embarrassing to me? Perhaps he had a precious childhood? Hasn’t he ever worked? Yeah ok – I did a bit of ego baiting. I really can’t resist it. At my advanced age, I have to take life’s small pleasures where I can.

I will admit that I wrote this post and my comments at TDB in part in the characteristic  bombastic Bomber style with that characteristic florid over statement. But that was just satirical fun.

But really the whole exercise is just an unpleasant delve into way that Bomber likes to give out, but has too fragile and ego to receive.

Oh well…. Back to real work both here and in getting this government removed. For some reason this actually involves swaying the middle of our society. Both are things that our rather middle class radical ‘friend’ appears to not be too interested in doing.

BTW: Have a look at the stats of TS and TDB from April 1 2011. So far TDB has been doing well. While they built off the existing left audience that has been built up, they have been steadily forging their own readership heading into the election. That new audience appears to have deserted them post election. Over the last 30 days, they are only marginally better than they were in the same 30 days last year.
I have hidden TDB’s recent fall, but you can play with the controls. The question is what does the site do over the next few years? They should probably learn to how to maintain an audience over the next 2 years. Being a dickhead and attacking other left sites probably isn’t the way to do it.

For the inevitable voices who say that I should suffer someone acting like a fool on the net because of their political opinions. I was involved on the anarchical protonet long long before I became politically active. Doing my bit in keeping the net cleanish is more important.

80 comments on “The prince and the pea ”