The problem with and the benefits of MIQ 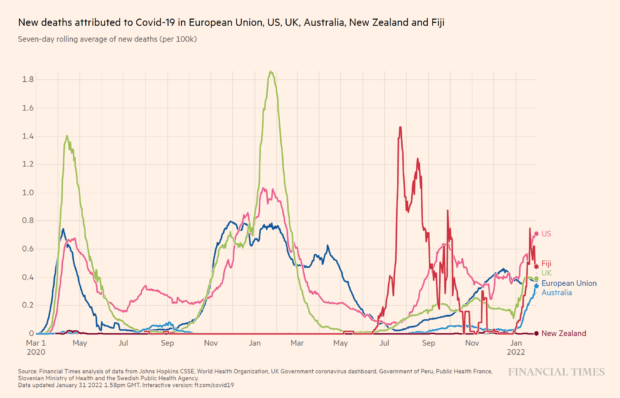 First let’s talk about the benefits.

It may not be apparent from the wall to wall sound emanating from the opposition and from the media but this Government’s Covid response has been exceptionally good and way better than that of pretty well every other major country in the world.  Check out the graph above if you need confirmation.

China has been better but only through the adoption of measures that locals would not tolerate.

MIQ has kept us Covid free for an extended period of time.  Coupled with an exceptionally good vaccine roll out the country is in good shape.  MIQ bought us time, very valuable time.

So far 217,818 people have been through MIQ.  Breaches have been few until Omicron overwhelmed it.

The Government is getting something of a media blitzkrieg from Charlotte Bellis who is conducting her negotiations with MBIE via twitter.  I appreciate her motivation, wanting to be somewhere safe for the birth of her child.  The system is cumbersome and is showing signs of strain.

Infection numbers are ramping ominously and a full on wave, the likes of which New Zealand has not seen before appears to be imminent.

And a decision on MIQ will be made shortly.  A decision was previously planned for last month but the explosion of Omicron numbers in Australia made the Government play for time.

Against this background the opposition continues to seek to score political points at every opportunity and are totally indifferent to the real world problems the Government is facing.  God help us if they were currently in control.  We would be in the same sort of mess that other right led nations such as England and Australia are in.

The Chris Bishop interview on Radio New Zealand this morning showed how cynical National’s approach is.

First up was the statement of position:

We think the time has come to end the misery of human lottery that is MIQ and essentially allow fully vaccinated kiwis in Australia and around the world to return and self isolate without going into MIQ.  That is the critical point.

Susie Ferguson then asked if National would open up the borders “now”.

Bishop replied by contradicting himself and agreeing that it needed to be phased in.  From Radio New Zealand:

There was an argument for phasing in the changes, but the most pressing need was to get New Zealanders in very desperate situations home, from wherever they are in the world.

“A lot of people have been stranded in Australia for a long time now but there’s also people like Charlotte [Bellis and others] who’ve had their visas expired, for example.”

He said the legal obligation and first priority was New Zealand citizens and permanent residents, and April or May would be a reasonable time frame for others, including people moving to New Zealand from other countries

What is it Chris?  Move immediately to abolish MIQ and let returning kiwis isolate at home or phase in the changes and have a hardship category?  His statement that he does not have access to the medical advice shows how much he was spinning this.  Holy talking out of both sides of your mouth.

He was asked if it was the right thing to do to close MIQ in December as National had advocated.  He said that at the time Omicron had not turned up and the delta wave had come to an end.  He ended up by saying that he stood by what National said at the time.

Again this is so cute.  It was inevitable that Omicron would show up at the border, Chris Hipkins publicly confirmed this in early December.  If we had opened up MIQ at the time the Omicron wave would have hit us quicker and been more severe.

Finally to return to the body count.

Cumulatively New Zealand has one death per hundred thousand people.  The Australian figure is 14.6, the UK 232.1 and the US 264.  If we had followed the advice of various English based commentators and matched their results we would have had in the vicinity of 11,500 dead kiwis.

Has MIQ caused extreme stress to kiwis overseas?  Clearly it has.  Has it also served us well in isolating us from the worst effects of Covid and preventing the loss of thousands of kiwi lives as well as the effects of long covid on tens of thousands more?  Yes it has.

These are tough decisions.  Which is why you need a Government that listens to the scientific advice and acts in the public interest.

93 comments on “The problem with and the benefits of MIQ ”