The Rena timeline: capacity and execution

The Herald has produced an extremely useful and detailed timeline of the Rena disaster to date. For me, it raises several questions that, I think, you can divide into two categories: first, did the government have the plans and equipment it needed to deal with a spill and, second, was the response carried out effectively?

Why hadn’t the government pursued the idea of getting an environmental protection vessel in the wake of Deepwater Horizon?
Earlier this year, in very similar circumstances, the freighter Godafoss hit a reef off Norway in the country’s only marine reserve, not far from the border with Sweden. The grounding happened on the evening of Thursday the 17th of February. Norway and Sweden (with a combined population only 3.5 times ours and combined GDP 6 times ours) between them boost dozens of environmental protection vessels designed for picking up oil and transferring it from stricken ships. The Swedish coastguard has 12 EPVs, the Norwegian coastguard another 6, and the Norwegian Clean Seas Association for Operating Companies can call on another 25 Norwegian Society for Sea Rescue multi-purpose vessels equipped for oil response. So, a flotilla of ships was quickly on its way to the Godafoss. Within a day, they had stopped the leak, surrounded the ship with booms, and mopped up most of the 100 tonnes that spilled. Despite the severe damage to the ship and grounding taking place just 100m from shore, after fears of a catastrophe, little environmental damage was done.

Why doesn’t New Zealand have any of these vessels? Why didn’t the governemnt follow up with the idea last year? Why don’t the new onshore and offshore petrol vessels have oil response capacity rather than just being pretty useless mini-warships?

The vessel we had to rely on to pump out the oil was the Awanuia, a small tanker designed to refuel cruise ships and freighters that was in Auckland but first had to sail to Marsden Point to unload the oil it already had onboard, which delayed its arrival by days.

Update: The Jackel has the Awanuia‘s GPS logs (man, it’s amazing what’s on the internet). It turns out it didn’t even leave to pick up the oil from the Rena until Friday and it didn’t go to Marseden Point at all. It seems it was on its ordinary journey from Auckland to Marsden Point to put on more fuel and got halfway there before turning around and heading to the Rena – that added 15 hours to its journey. It didn’t even leave Auckland until two and a half days after the Rena grounded. We were lied to about why the Awanuia took so long, it wasn’t offloading fuel, it seems just hadn’t been asked for. Updated Update: I rechecked the GPS myself and it looks like the records cease for 9 hours. Presumably, it went up to Marsden Point and headed back during this time.

Why was the offer of the Lancer inflatable oil recovery barges, made on Day 1, ignored?
It just seems staggering that these world-class vessels (which, contrary to Steven Joyce’s claims, are designed to operate in rough seas) were sitting in Auckland, ready and waiting and Maritime New Zealand chose not to take up the offer.

Why are the head honchos of Maritime NZ accountants, not seafarers?
Apparently only a handful of MNZ’s senior people have ever been to sea. What more needs to be said on that one?

Why did the Northern Quest and Phoenix barges stay in harbour, rather than going out to meet the oil?
It just seems bizarre that these two barges, which can mop up oil, have just sat in Tauranga harbour waiting for the oil to come to them.

Why did the salvors come from the opposite side of the world?
Maritime NZ told the shipping company to appoint salvors and that got a Dutch company, presumably already contracted, to come out. It’s 24 hours flying time around the world and you typically add another 10-12 for transfers. Getting the Dutch to Tauranga took until Day 4 for the salvors to arrive from the Netherlands. I understand this is a specialist skill, but was there really no-one closer, like in Asia or the West Coast of the US? That could have cut the deployment time in half, giving them another day or more to get the oil pumping out. If the oil couldn’t be moved without the salvors fixing the pipes (and, I believe that’s not correct: the oil could be pumped off the ship still, the pipes were needed to move the oil between tanks within the ship) then why did the government allow such a slow reaction?

Why did it take so long to mobilise the locals and show them the plan?
On Friday, Day 3, Steven Joyce was saying that oil was inevitably going to come ashore. Yet, when it did, three days later, there was no response. Pissed off locals took it on themselves to do the job. It wasn’t until Thursday that the government bothered to organise training of volunteer team leaders to do the beach cleaning (yeah, this ‘complex task’ that locals were told they shouldn’t try to do themselves is so hard you can do it as long as you’re overseen by someone who had half an hour’s training)

When did the government get their first briefing and what decisions did they take?
In today’s Herald, John Roughan writes:

When a Prime Minister hears that a fully laden container ship has foundered on a populated coast, I imagine he summons a crisis meeting of ministers and chief executives of all agencies that could possibly be useful.

At that meeting he should not be listening to reasons why not much can be done before the weather breaks.

If he is hearing only problems and excuses, I would hope he stops the talk and, speaking very slowly and clearly, says we will not have oil destroy Bay of Plenty beaches next week, we will not have floating containers pose a risk to shipping from our busiest export harbour, the livelihoods of people in fishing, tourism and recreation industries will not be ruined this summer.

He tells them he will reconvene the meeting in two hours and says, “When I come back I want to hear what we are going to do.”

Clark would have applied some media pressure. Right after such a session she would have told reporters what she expected from Maritime New Zealand and would have aligned herself with public anger if solutions were not forthcoming.

I don’t believe Key had any such briefing. It shouldn’t be news to anyone by now that Key doesn’t do details. In fact, Key was so isolated from the unfolding disaster that he was in the Bay of Plenty on Day 3 and didn’t make any reference to the Rena. The next Tuesday, when the oil was really coming ashore and people were circumventing the useless official response, Key was in Hamilton putting up Brighter Future signs. Talk about out of touch. As Roughan concludes:

This week nothing seems as certain, not even the election now that something has happened to remind us of it and raise the question. How well are we being governed, really?

How much is this cock-up hurting National?
Make no mistake, National knows it has stuffed up big time and is now basically praying this will all go away.

You can tell how a political party feels about an issue by how much they talk about it. In over 250 posts between them (that’s 1 an hour 24/7, guess they have nothing better to do) since the grounding, David Farrar and Cameron Slater have written less than a dozen concerning the Rena and they’ve either being attacking Labour and the Greens or trying to minimise the issue. The Beehive site doesn’t contain a single press release on the Rena out of 70 released since it grounded. Remember, this is a story that has dominated the press for over a week. But National just doesn’t want to talk about it. 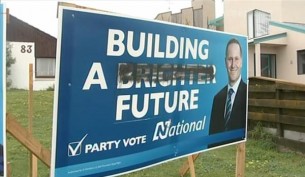 The Nats know this hurts them on a number of levels. It derails the government’s oil drilling agenda. Its reputation as a competent manager is lost. Key’s all-important Brand is blackened and that’s transferring to coverage of his other actions (eg S&P lies, the throat-slitting, the Tupperwaka lock-out, gay policy, and economic management).

The perpetual smirk at the corner of Steve Joyce’s lips doesn’t help either.

National’s reaction reeks of panic. Witness Key, Farrar, Slater, and John Armstrong attacking Labour for quite sensible and entirely justifiably announcing a moratorium on deepsea oil drilling until such time as we have the capacity to deal with oil spills properly (Armstrong is an extraordinary isolated voice in today’s Herald, and watch the video in the link above for Goff’s excellent rebuttal of Key’s petulant comments, National is so aware of how bad Key has been that they’re trotting out the excuse that he’s sick). While National is still acting like a rabbit in the headlights, Labour is nimbly reacting to changed circumstances. National’s only answer is anger because it knows Labour is on the right side of sense and public opinion, and National can’t follow for ideological reasons.

The Rena is an issue of competence and preparedness. This is where Labour excels; it is chock full of people who are used to governing and used to reacting to changed circumstances. National is not. It will continue to do what it excels at: trying to manage expectations in the media and deflect blame with their pointless obsession over why the Rena went aground. Sometimes, all the spin in the world doesn’t work and, in fact, it becomes transparent for what it is. Watch for Labour to announce new policy on oil response while National continues to flounder.

The Rena disaster is a tough situation, make no mistake. But the government’s job is to deal with tough situations by being prepared and competently executing its reaction. The Rena has shown National is not up to it.

82 comments on “The Rena timeline: capacity and execution ”