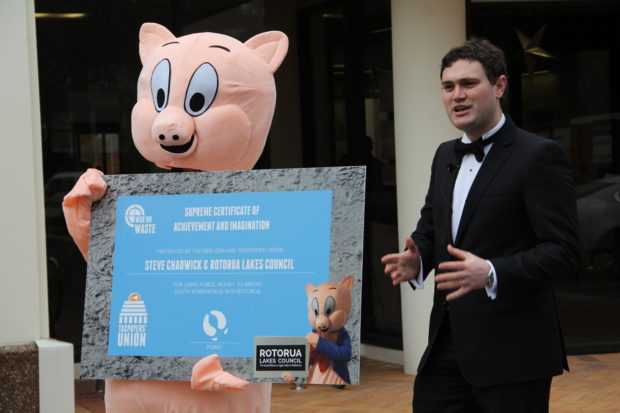 Clearly it is a time to put ideology aside.  The right, elements of which have thought the best thing to do to the state is weaken it that badly that they could then drown it in a bathtub, are rethinking and now realise that a well resourced, active and engaged State is actually a life saver.

Like our comrades at the Taxpayer’s Union.  Maybe they are a real union after all.  They have released this policy document which containse suggestions of what the Government should be doing.  Their paper contains this statement:

A market-led approach in these times would be an extraordinary mistake. The extremely tight timeframe, matched with significant information deficiencies on the part of consumers and firms, plus massive externalities of individual behaviour all characterise market failure.

As fiscal conservatives it does not come naturally to call for a dramatic expansion of the size of state spending. But a core of role of Government, and why we pay taxes, is to protect the citizenry at times of national systematic shock such as war or pandemic.

And this is one of their proposals, something which Karl Marx would be proud of:

A variety of firms will go bust in the coming 12 months. The Government will inevitably seek to support some firms and sectors that for which continued operation is of strategic importance, Air New Zealand and major airports being obvious examples. Support should be limited to a handful of strategically important firms, rather than an excuse to nationalise large swathes of the economy.

While there is justification to ensure some major companies continue, shareholders should not be insulated. The Government should only propose terms for bailouts which give the Crown a significant (majority or total) shareholding in these firms. The funds are for the continued operation (i.e. jobs and services) of these companies, not to protect the existing shareholders.

They then propose a sell down when things return to normal.

National has gone very quiet.  Apart from their cheerleaders suggesting that the Government has been doing too much AND too little and have acted too quickly AND too slowly they realise that now is not a time for partisan political games.

There is also this strange contribution from a techhead published in the Herald.  They insist that the country should be run in the same way as well resourced highly profitable tech companies.  If only.

The primary subject of the interview, Zuru founder and Entrepreneur of the Year Nick Mowbray, urged the Government to do a lot of things most of which it was doing.

Ah the right. They spend most of their time weakening the state as much as possible, then when we strike a crisis they have all the answers.  Marx would be perplexed.

38 comments on “The right become socialists as Covid-19 bites ”