Cleaning up after the royals

Buckingham Palace cleaners aren’t even paid the London living wage while the British taxpayer will have to pay for the royal wedding cleanup. That’s one reason why I’m a republican. The Globe and Mail reports:

The cost of cleaning the streets of Westminster the day before the wedding is estimated by the council at $83,000. Cleaning up afterward will be a bigger expense: After the 1997 funeral of Diana, Princess of Wales, the cleanup cost was $617,000, or $837,000 in today’s currency, and the wedding will cover a larger area; some accountants estimated the cleaning costs in the millions.

You can join their online petition here. I have; I wouldn’t like to live in London on 33 cents more than our minimum wage.

The Globe and Mail has More about the costs.(Figures are converted to NZ dollar equivalents).

The biggest cost of the wedding by far will be the $8.4-billion price of shutting down the British economy for 24 hours by declaring next Friday a national holiday, according to estimates from the Confederation of British Industry, the country’s major corporate lobby group. That will be a painful blow for a country that faces a fiscal deficit of  $337-billion this year – and, to make matters worse, the wedding falls amid a cluster of other holidays, leaving only three working days between April 22 and May 2. Many businesses are expected to stay shut through the entire 10-day period, a string of lost productivity that could remove $62-billion from economic output, according to an estimate by accounting firm RSM Tenon. The official costs of the event are expected to exceed $102.6-million, and many of these will simply be grossly oversized versions of the usual wedding costs (the average British wedding, according to one study, is $38, 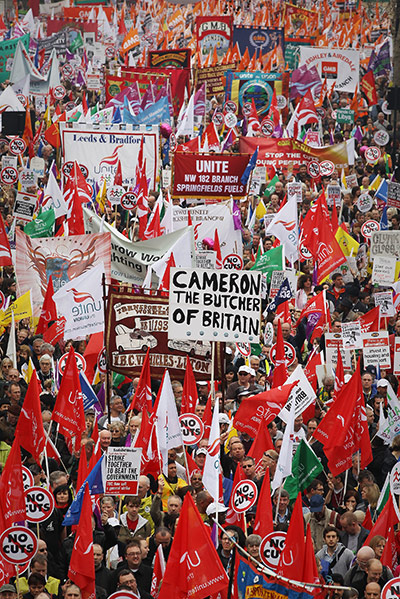 000).The Queen, whose personal wealth is estimated at $598-million, has pledged to pay for a share of the wedding, though officials from Clarence House, the office of Prince Charles, said in a briefing this week that the Royal Family’s input would be “in the six figures, not in the seven figures.”

There will no doubt be a lot of people out on the streets to watch. It will be interesting to see how that compares with the 500,000 who were protesting last month about the savage budget cuts imposed by the Conservative-Liberal government.

The ancient Romans kept the people mused with bread and circuses; there’s no bread for the cleaners in this circus though.

14 comments on “Cleaning up after the royals ”