The stamp of democracy

Three years ago, when the National Party announced its plan to make all primary schools test pupils’ ability in reading, writing and mathematics, teachers were scornful. … The union, in league with the Principals Federation, says the standards are being rushed … Mrs Tolley is surely right to suggest the unions’ arguments are now purely philosophical. This has underpinned their resistance from the start. It has endured despite the Government concessions and despite the public support for national standards. It is the only reasonable explanation for the dragging of feet and the increasingly radical demeanour.

An interesting smorgasbord of aggressively negative framing (teachers are “scornful”, “in league with”, “radical”) with a side order of firm disciplinarian hectoring. Tasty.

As anyone actually following the issue knows, the teachers issues are not “purely philosophical”, they are completely practical. Teachers are working, as they always do, for the interests of the children that they teach. The way the national standards are being introduced is a probable disaster, according to both the international evidence and the government’s own own expert advisors.

In short, the editorial is as bad as they come. Narrow minded propaganda that ignores the real issues of concern. But what really lodged itself firmly up my left nostril was the way this nasty bit of union bashing tried to wrap itself in the Union Jack trappings of democracy:

The minister has strong arguments to support her stand. Most fundamentally, National’s policy was put to the electorate at the last election. It comes with the stamp of democracy. … Similarly, teachers have a responsibility to heed the policy of a democratically elected government. That is a lesson they, and their unions, seem to have yet to learn. 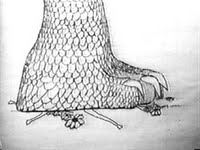 “The stamp of democracy” – has a lovely ring to it don’t you think? Pretty much sums up the main fault that the founders of many democratic institutions clearly understood and sought to avoid, namely “the tyranny of the majority“. Being a democracy does not mean that we abandon our free will, our minds, and our common sense for the three year term of a government. It does not mean blindly following orders. It is the job of the citizens to do as the teachers are doing, to raise valid concerns, to resist stupid policies, and to hold the government to account. That’s why we have – you know – an Opposition (an institution that the Herald’s editorialist would like to do away with?). Holding the government to account used to be one of the functions of the media too. The Herald editorial disgraces what is left of that tradition.

[Update: to be fair – other Herald editorials on this topic have been rather better!]

120 comments on “The stamp of democracy ”