“The fact that this week’s Budget will do no more than mark time should come as no surprise. We now have getting on for three years’ experience of a government whose idea of managing the economy is simply to wait and see what turns up.”

“Some of what has turned up has not been very helpful. The Christchurch earthquakes, in particular, plus the collapse of a couple of dozen finance companies, have not made things any easier.

The Government, of course, has seized on these factors to explain why its do-nothing policy has not produced better results.

But other developments have been very advantageous. World commodity prices – and prices for our commodities in particular – have soared to record levels. Our major export markets – Australia and China – have been the two economies that have best been able to shrug off the global recession. “

This is the amazing thing. Our biggest trading partners are rocketing along, and yet we’re not. Why not? You can’t blame the earthquake, as David Cunliffe got Bill English to acknowledge:

Hon DAVID CUNLIFFE (Labour—New Lynn) to the Minister of Finance: What was the annual rate of GDP growth for the year ended December 2010 projected in Budget 2010, and what was the actual rate of growth for that period according to Statistics New Zealand?

Hon David Cunliffe: Is it correct that his Budget 2010 projected that growth in the first three quarters of 2010, nearly all of which was before the first earthquake, would be 0.8 percent, 0.8 percent, and 1.6 percent respectively, whereas actual growth was 0.7 percent, 0.2 percent, and minus 0.2 percent, which means that by the end of September 2010 economic output was $1.6 billion below the forecast he produced in May 2010?

Hon BILL ENGLISH: Yes, growth was slower than expected, and the reason for that was mainly that New Zealanders were saving more than was expected. That is now showing up in a fast-rising household savings rate.

Uh, huh. So people are desperately trying to get their debt down before they lose their jobs, and English thinks it’s a good thing.

our public finances are, historically and comparatively, in a reasonably healthy state, reflecting the prudent management and repayment of public debt carried out by earlier finance ministers.

These factors should surely have meant that we, too, like our two major trading partners, were able to rebound from recession and resume a rate of growth that would restore something like full employment and – with higher tax revenues – achieve an immediate improvement in the Government’s accounts. But, disappointingly, having fallen into recession before most other countries, we are still bumping along on the bottom.

Economies are robust things. You can kick them, neglect them, starve them, but sooner or later their natural buoyancy will bring about a recovery of sorts. But that recovery will be longer delayed, and will be from a lower base and less strong and sustainable than it should have been.

The failure to get the economy moving is in other words not a cost-free dereliction of duty. Over a three-year period, the failure to move forward could well have cost us up to $20 billion in lost national income and will mean that growth, when it does resume, will be from a lower base and on a lower trajectory – penalising us for years to come…

…John Key has another characteristic, which he shares with my former colleague, Tony Blair. His basic pitch to the electorate is that he is a nice guy who can be trusted to take the pain out of politics – and, to some degree, the politics out of politics.

A winning smile and a telegenic personality – both possessed in large measure by Blair and Key – will get you a long way; but that advantage is put at risk when hard decisions have to be made and people are disappointed.

We need a Budget this week that faces the tough issues, that sets us on course to save and invest, to reduce our national indebtedness, and to improve the competitiveness of our productive sector – and to use the comparative strength of the Government’s finances to help us achieve these goals. It seems unlikely that we will get it.

The ‘smile and wave’, ‘do nothing’ government is letting this country go down the toilet not only from malign neglect but through bad decisions like borrowing for tax cuts. Who is content to let this continue? 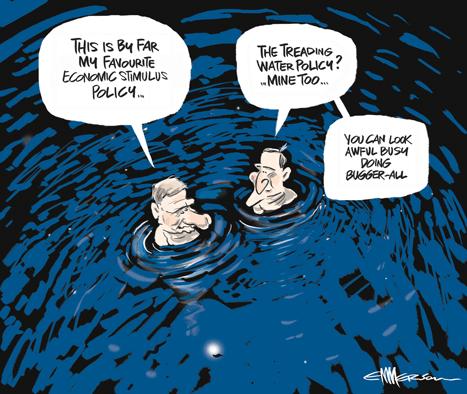 24 comments on “The treading water budget ”