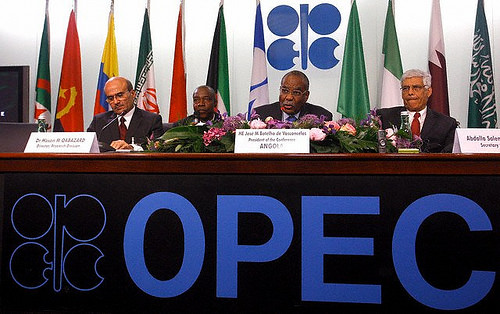 In a scenario put out late last year by the International Energy Agency, the price of oil might not again reach up to the US$50 to $60 range until the 2020s. Maybe won’t get back to US$85 until 2040. Right now it’s selling at $33 per barrel. This scenario would have a few big consequences.

As noted in Salon, the countries who own major oil companies and would forego that massive income will hurt. Think of what that low price may put at risk: Venezuela’s social programmes, Nigeria’s stability such as it is, Iraq’s postwar recovery, Iran’s post-sanctions recovery, etc. Maybe Russia and Saudi Arabia have enough cash saved not to worry about their state expenditures, and to keep their international engagement strong. Still, it’s not just BP and Shell that’s hurting.

This impact, as New Zealand and Alaska have already seen, also falls upon regions who need fresh investment and good jobs. They too have expected that major explorers would keep investing locally. East Timor, Tasmania, Indonesia, Myanmar, the Falklands, even New Plymouth and Dunedin. Many such peripheral and developing economies will feel the hurt as oil exploration largely ceases.

The politics of this will be that all but a few oil-producing countries will become less politically influential. Countries like Denmark, Spain, US and China who have great oil-substitution industries will rise.

This also matters for whole sharemarkets. Listed oil stocks don’t start looking so good. Schadenfreude, until we remember that a whole bunch of many public and private superannuation funds are at stake. Including ours.

Perhaps the longer term net outcome is that the world has just bought itself more time to make the adjustments towards a less oil-reliant future. Maybe, for now, it’s both a good and a bad thing; but if it’s continuing, it’s a massive thing.

This may not play out. Maybe Saudi Arabia and Iran will go to war. Maybe China will boom again and revert to buying gas-inefficient cars. Maybe ISIS starts winning again. None of these are more likely than the current trend.

We appear to be in a low oil price track for the medium term, and that has major consequences.

186 comments on “The unexpected oil crisis ”