The United States is becoming a rogue state 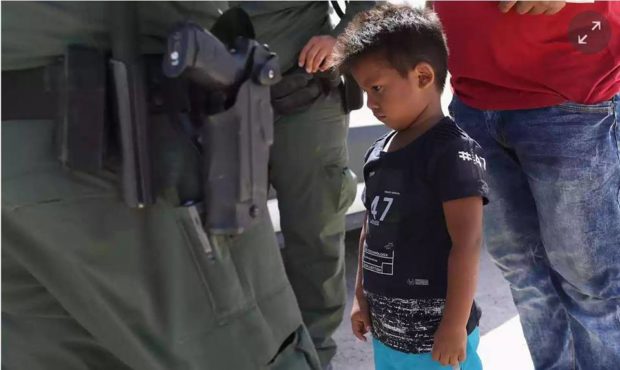 This is not a claim I make lightly.  But the United States, through its recent behaviour, is showing signs that it is becoming a rogue state, a description used to describe States that amongst other things has withdrawn from the United Nations Human Rights Council and is engaged in the mass incarceration of kids whose parents were seeking entry to the United States.  And this is putting to one side its attempt to undermine the international response to Climate Change and to pick fights with erstwhile allies.

The withdraw from the UNHRC is allegedly because that body has a “chronic anti-Israel bias“.

The United States is set to withdraw from the United Nations Human Rights Council, with the US ambassador to the UN calling the organisation a “protector of human rights abusers and a cesspool of political bias”.

Ambassador Nikki Haley said the withdrawal was not a retreat from the US’s commitment to human rights, but called the 47-member, international council “an organisation that is not worthy of its name”.

The US has long called for the body to reform, saying it allows members that have been accused human rights violations. Ms Haley pointed to the involvement of countries like China, Cuba and Venezuela in her speech on Tuesday.

“Look at the council membership, and you see an appalling disrespect for the most basic rights,” Ms Haley said.

Ms Haley also accused the council of maintaining a “disproportionate focus and unending hostility towards Israel” that shows it is “motivated by political bias, not by human rights”.

The allegation of chronic anti Israeli bias is difficult to understand.  Palestine is fighting for its life and the subject of a continuous stream of attacks from Israel.  Of course other Nations should stand up and oppose this.

The relative death rate of one side’s civilians caused by military action by the other side is to me by far the most effective tool to work out if what Israel is doing is legitimate.  In the early 2000s it was 2.5 Palestinians for each Israeli.  In 2009 the death rate was 884 to 13.

And what is the current ratio of deaths?  From the start of the demonstrations on Palestinian soil against Israel’s treatment of them on March 30, 2018 to May 15, 2018 there were 114 deaths of Palestinians and an astounding 12,271 injured compared to one Israeli soldier being slightly injured.  The number is much higher now but the UN Office for the Coordination of Humanitarian Affairs has not updated its figures since May 15.  But I am sure you get the picture.  The ratio of deaths is now completely meaningless because it is so one sided.

We are not facing a war.  We are facing a one sided slaughter.

And what have the Palestinians been doing to deserve this treatment?  Engaging in passive protests on Palestinian land.

And no one is safe, not even Palestinian medics.  The UN reported on the death of Razan An Najjar, a 21 year old medic in these terms:

United Nations officials and agencies have expressed their outrage in the face of yesterday’s killing of Razan An Najjar, a 21-year-old female volunteering as a first responder, while carrying out her humanitarian duties with the Palestinian Medical Relief Society (PMRS). Razan was hit by live ammunition fired by Israeli forces while trying, with other first responders, to reach those injured during the ‘Great March of Return’ demonstrations close to Israel’s perimeter fence around 18:30. She was taken immediately to a trauma stabilization point, and then to the European Gaza Hospital, where she died just after 19:00. Three others in her team were also injured.

She was shot and killed even though she was dressed in white and had raised her hands while approaching a Palestinian who needed urgent medical treatment.

The last moments of the life of Razan Najjar before being shot in the chest by an Israeli sniper. Her fault was to treat the wounded. The lives of others before her life, this was Razan#RazanNajjar #رزان_النجار https://t.co/rnwb5u7p1Y

And to cap it all off Israel then attempted to denigrate her character by doctoring a video to suggest that she was deliberately acting as a human shield for Hamas.

Israel is claiming legal justification for its actions. Customary International law requires the response of a state nominally acting in self defence to be proportionate to the threat. Israel is clearly in breach of this.  Shooting unarmed people engaged in peaceful protest in their own country.

For America to want to side with Israel makes no sense,  And totally undermines its position as the leader of the free world.

As for American Treatment of families seeking to enter the United States illegally all I can say is that if you are not affected by what has been happening you should check yourself for a pulse.

The news has dominated recent media.  America is engaged in the mass separation of children from their families if those families arrive in the United States without a visa.

The White House appears to have three contradictory explanations for the policy.

The first is that there is no change from what used to happen and there is no policy to separate families.

Trump contradicts this by blaming the Democrats for the problems and insisting that the only solution is to fund and build the wall.

Meanwhile evil bastard and Whitehouse aide Stephen Miller has described the mass incarceration of children as a simple decision. The consequences are an intended feature of the policy, not a bug.

For people like Stephen Miller, Jeff Sessions, and yes, even Donald Trump, the fact that children are being separated from their parents is a feature, not a bug.

They view it as a deterrent.

And Geoff Sessions has reached out to the bible for justification for what the Trump regime is doing.  From ABC News he is quoted as saying:

I would cite you to the Apostle Paul and his clear and wise command in Romans 13, to obey the laws of the government because God has ordained them for the purpose of order,” he said on Thursday. “Orderly and lawful processes are good in themselves and protect the weak and lawful.”

As reported members of his own Methodist Church have filed a formal complaint against him, accusing him of “child abuse,” “immorality,” and “racial discrimination” and the “dissemination of doctrines contrary to the established standards of doctrines” of the Church.

Our government should not be in the business of warehousing children in converted box stores or making plans to place them in tent cities in the desert outside of El Paso. These images are eerily reminiscent of the internment camps for U.S. citizens and noncitizens of Japanese descent during World War II, now considered to have been one of the most shameful episodes in U.S. history. We also know that this treatment inflicts trauma; those who have been interned have been twice as likely to suffer cardiovascular disease or die prematurely than those who were not interned.

People on all sides agree that our immigration system isn’t working, but the injustice of zero tolerance is not the answer.

And Republican heavyweights are showing signs of growing spines and standing up to Trump and his group.

The administration’s current family separation policy is an affront to the decency of the American people, and contrary to principles and values upon which our nation was founded. The administration has the power to rescind this policy. It should do so now.

Both Palestine and America show that our world is in a pretty fucked up state right now.

If you are interested there will be a vigil outside the US Embassy in Auckland on Friday June 22 from 5:30 pm and the Migrant Workers Union are organising a protest on Saturday June 23 at 12 pm also outside the Embassy.

53 comments on “The United States is becoming a rogue state ”