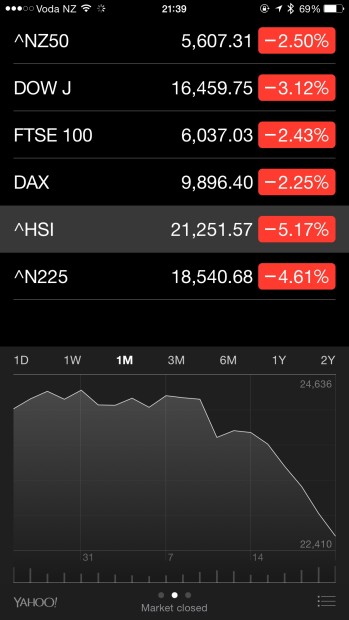 We live in interesting times.

Who would have thought even a few months ago that the price of oil would decline to US $40 a barrel?  But it has despite being over $100 a barrel 12 months ago.  And reports of an increase amount of oil stockpiled during the US summer when supplies usually plummet  sent the US market into something of a spin.

The industry must be hurting.  So many decisions were made to invest in oilfields reliant on the return being $100 plus a barrel.  Like New Zealand’s dairy farms there is no way that money could be made at this particular price.

And the stock markets, favourite play places of the wealthy, are not performing in the way intended.  The major exchanges are all posting losses.

In China despite emergency measures such as the suspension of the sale of shares once their value dropped by 10%, the suspension of new IPOs, new cheap credit, Government agencies actively buying shares and a ban of share sales by major shareholders, the Shanghai Composite Index yesterday dropped what the Guardian describe as a jaw dropping 8.5%.

And this is despite trading in company shares being suspended when they lose 10%.  Without the Chinese Government’s measures the losses would be extreme.  And the Government’s urgent actions have not corrected a slide that has been happening for a while.

Two weeks ago China devalued the Yuan and caused more than $5 trillion being wiped off the value of global stock markets no doubt in an attempt to maintain confidence and profitability in its export sector.  All that this appears to have achieved is to spread the losses throughout the world’s stock exchanges.

And this time things are different because the Chinese Government appears to be running out of levers to use to keep share prices up.  A recent announcement that it would allow local authority pension funds to invest in the sharemarket has made no difference.

What is the cause?  Pat Robinson thinks that it is because of abortion in America.  Yep certifiable.

Professor Steve Keen has a much more coherent theory, that the crash is because of the build up of Chinese debt.  Private and business debt is now 180% of GDP up from 100% in 2008 and clearly the appetite for more is waning.  Things were fine when prices were going up but now that losses look more likely repaying debt is going to be a much more attractive proposition. 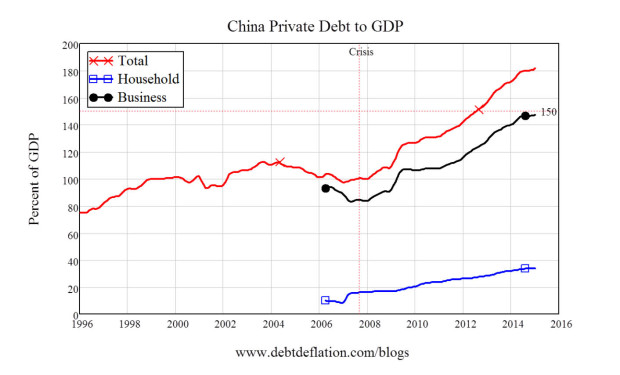 The biggest giveaway that we are in a crisis is the instability.  Every day many, many intelligent people analyse things to work out fractions of change where they can bet and make money.  The market is meant to stabilise and minimise their behaviour so that changes do not occur drastically.  Unless a crisis is happening.  Which it clearly is.

Reduced oil consumption and lower work loads ought to be things to celebrate.  That capitalism is facing a crisis suggests that our economic system is deeply and inherently flawed.