I was hoping to present a detailed analysis of Simon Bridges conference speech and what he was proposing by way of education policy.

I could not however because it was nowhere on the web, at least as far as I could tell.

When I went to the National Party website and clicked on the 2018 conference link I was led to this page: 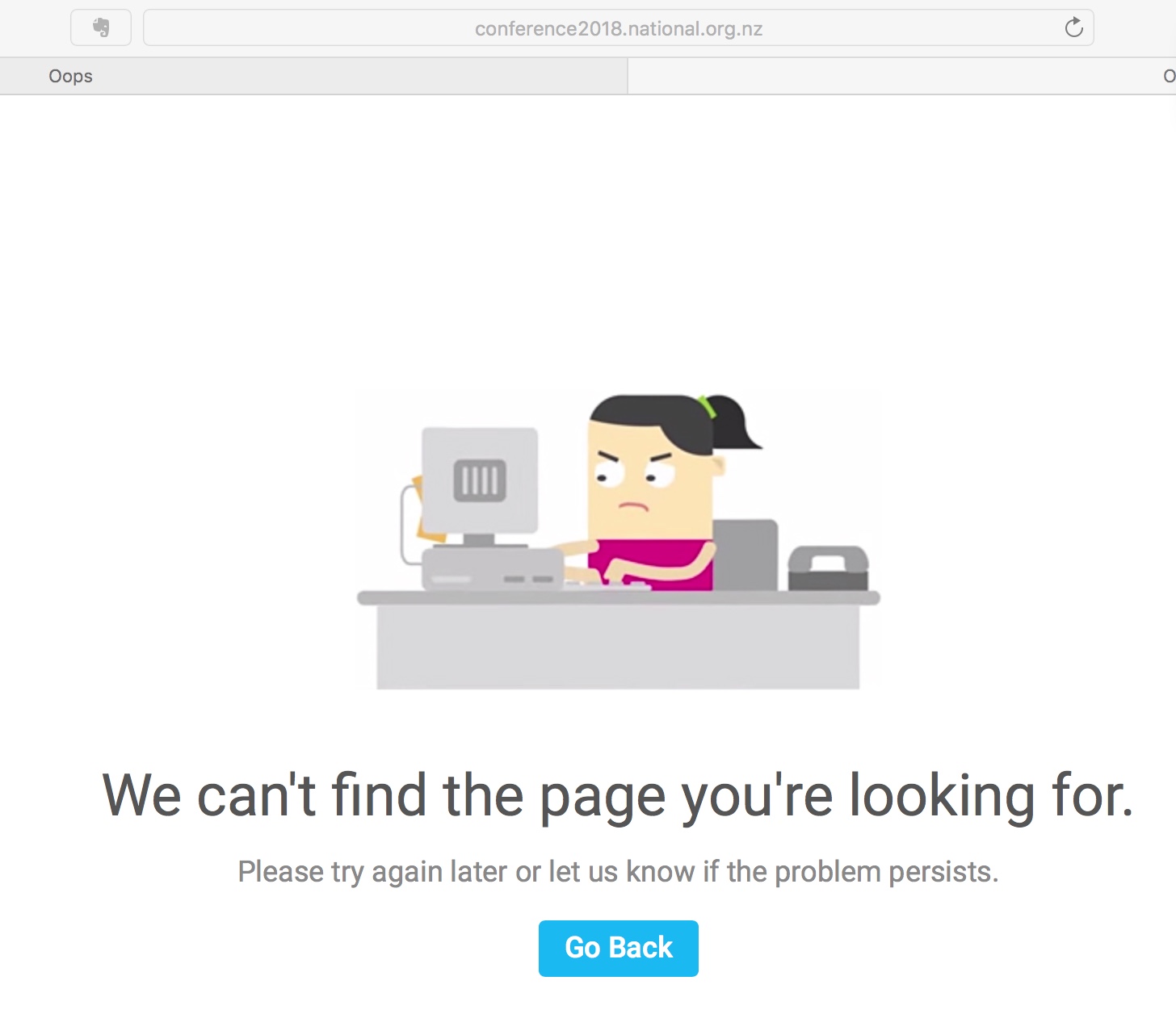 And there was all sorts of other problems for National, like Social media with spelling mistakes.

I mean I know it's just the social media but getting a typo into your leader's big quote is… Amateur. #ast pic.twitter.com/dbPU8VI4Lj

But the cheerleaders were there to try and deflect attention from these shortcomings.  From Stacey Kirk at Stuff:

National leader Simon Bridges has delivered a commitment to reduce class sizes in primary schools, during a major speech in which he also attacked the Government’s economic management.

In a fiery speech to the National Party annual conference on Sunday, Bridges promised National would increase the number of primary teachers to reduce class sizes and give kids “more teacher time”.

“With the right education we can overcome the challenges that some children face purely because of the circumstances they were born into,” he said.

The announcement was met with thunderous applause as the high point of a conference designed to reinforce the party was still strong, in the face of its election loss.

“There is one thing every child needs to help them achieve their potential, from the one that struggles to sit still and follow instructions to the bright child that wants to be challenged to the gifted child that doesn’t know how to channel their talent,” Bridges said.

“And that’s attention from one of New Zealand’s world class teachers who can cater to the needs of each child, and spend more time with each of them.

Then crickets.  No detail.  Nada, nil. nothing.

Remember when David Cunliffe was castigated and hounded when in opposition when some of Labour’s policy detail, which included over 50 pages of information, was not quite pristine?

The difference in treatment is startling.

Is this what National has to show for a year in opposition?  A slogan without costing?

National will have some explaining to do because the last time it addressed the issue of class sizes it tried to put the student teacher ratio up, not down.

The Government’s move to increase class sizes has sparked immediate controversy, with accusations it will have a ”severe impact” on the quality of primary school teaching.

Education Minister Hekia Parata this morning announced the schools funding formula would change, with the student ratios in the mid-years of education changed.

Instead of the existing range of anywhere between one to 23 up to one to 29, there would be a single ratio of one to 27.5, in a change that would save about $43m per year.

Parata said about 90 per cent of schools would either gain or have a net loss of less than one full time equivalent teacher as a result of the combined effect of the changes.

“These more consistent ratios will give schools greater certainty over their resourcing from year to year,” she said.

And teachers are not buying it.  From Newstalk ZB:

A number of those within the teaching sector are finding National’s promise of smaller class sizes hard to believe.

The promise was the centrepiece of Simon Bridges’ speech at his party’s annual conference at the weekend.

Auckland Primary Principals’ Association president Helen Varney told Kate Hawkesby over the past nine years the National government did little to show trust or raise the status of teaching.

“Three years ago the National government had plenty of opportunity to change their policies, and change the way teaching was viewed and bring more people into the profession but very little of that was done.”

Varney says she therefore has little confidence in the announcement.

“Look it’s a great idea, it’s wonderful, it’s actually what we want. But Mr Bridges is very short on detail, he doesn’t give us any detail on how many students are actually going to be in that class.”

This was a strange choice for National to make.  Sure it is a good think, like patting a dog is a good thing, but there is no idea of how, when or how much,

It is incredibly lazy.  I suspect that BBQ season will continue for National’s caucus.