Here’s another entry in the Very Important Columnist vs Parasitic Bloggers file. While the professional mainstream media were all chanting in unison that the American presidential election was “too close to call”, one (famous!) blogger correctly predicted the result – for every state. The Guardian reports:

…  Silver didn’t just predict Obama was going to win it. He correctly projected the results for every single one of America’s 50 states. Something 50 tossed coins would have less than a one in a trillion chance of getting right.

Ah, well. That’s a little more impressive. How’d he do it? With his “election simulator” statistical model, which aggregates hundreds of polling figures and economic data, weights it all for accuracy, factors in a load of fancy maths about past elections and boils the whole thing down to a percentage chance of victory for each candidate. On Tuesday morning, while many pundits were insisting it was too close to call, Silver’s model put Obama’s chances at a precise and healthy 90.9%.

How did pundits feel about that? Pretty uncomfortable. He was derided in the media as “a joke”, who was “getting into silly land”. One rightwing blogger even dismissed his predictions on the grounds that Silver – an openly gay Democrat – was “thin and effeminate”.

(Today’s xkcd is also on the case.)

In 2008 Silver correctly predicted 49 / 50 states. So, thin and effeminate statistics 2, mainstream media 0. Political punditry, at least in America, is going to have to lift its game… 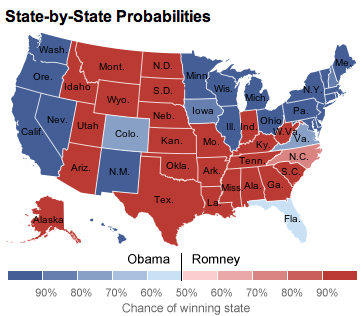 25 comments on “Thin and effeminate statistics ”